By Jay Floyd January 26, 2010
Plenty of things going on around Baseball Land that are worth mentioning. Take a look, and catch yourself up. 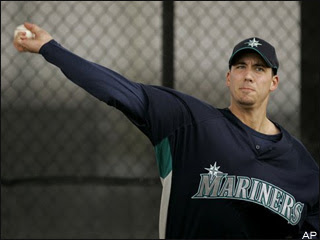 The Rookie Career Development Program is an annual MLB event, held every January, where top prospect are brought together to learn about life in the big leagues. It is designed to allow the young players to prepare for what lies ahead of them off the field...dealing with the media and finances, as well as any pressures that may arise at home or in the clubhouse. The symposium was held last week, and Phillies prospect right handed pitcher Phillippe Aumont, who was acquired in the Cliff Lee trade, was there.

In an interview posted on Phillies.com (here), the Canadian born Aumont was asked about his language barrier coming from a background where French was his first language, and learning English on his own. He stated that, "It took me a while. It took me a few years to get over my stage where I was shy to speak and make mistakes and everything. And now I feel more comfortable and every day I learn something new." 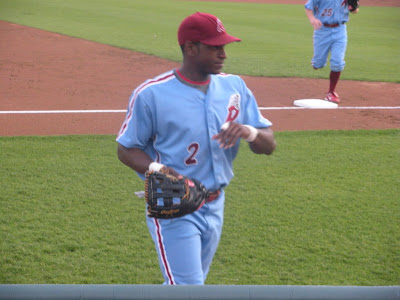 The Yankees traded for former Phillies OF prospect & top draft pick Greg Golson today. The deal sends minor league infielder Mitch Hilligoss to Texas for the speedy Golson, who projects to play for New York's triple A affiliate in Scranton this coming season. Golson, was once a highly touted prospect who was invited to play in the MLB All Star weekend Futures Games but is now a marginal prospect who can't safely break onto a Major League roster for longer than a couple weeks. 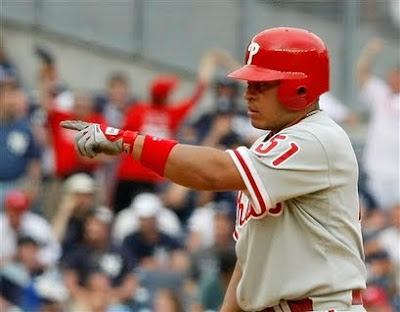 The Carlos Ruiz signing is finally official, as he passed his physical. The Phillies held a press conference today, at Citizens Bank Park where Ruiz finessed the Q&A session with his thick Panamanian accent. Ruiz spoke of this contract being a dream come true. He grew up as a second baseman, and during that time, all he could dream about was making it to the Major Leagues. Then, since he's been a Major Leaguer, a contract like this has been his dream. The contract is 3-years/$8.85 million, with an option for a fourth season. 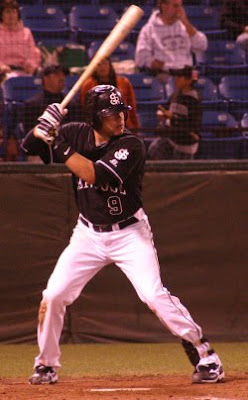 The Phillies claimed minor league infielder Brian Bocock off waivers from the Blue Jays today. Bocock spent minimal time in double A with the Connecticut Defenders last season, where he batted .171 with a double, while going just 2-for-5 at stolen base attempts in 25 total games. In 97 games with High A level San Jose in 2009, Bocock batted .241 with 3 homers and 48 RBI. Bocock will turn 25 before the start of the coming season and could be looked at to fill the hole left by Brad Harman, who was released after last season. Bocock had been claimed off waivers by Toronto from the Giants earlier this month. 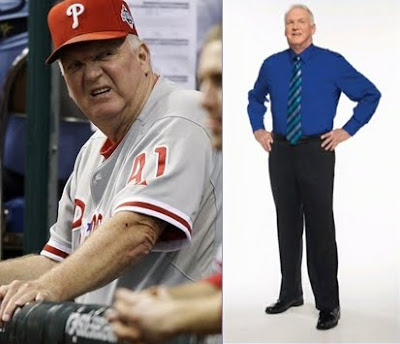 Last week, plenty of news sources and blogs were all over Phils' manager Charlie Manuel's weight loss. The dramatic drop in pounds, Manuel claims, was 58...thanks to Nutrisystem and a regular offseason exercise routine. Speaking to the press this afternoon, Manuel said, "I looked at a picture of me. My stomach was over my belt. I went, 'That's a pretty big gut.'"

Glancing through my very own photo albums today, I realized that Halloween efforts to dress up as Charlie will now be far more difficult if the guy in charge of the Phillies continues to get more svelte. 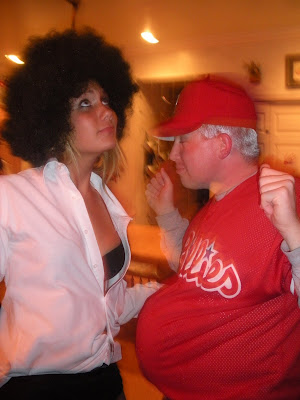 Be sure to follow PhoulBallz.com on Twitter HERE to get down with unique stat info, other updates and our new "Name that Phillies autograph" game!