By Jay Floyd January 07, 2010
A bit of early spring training news landed in the laps of phans everywhere this afternoon when the Phillies announced the names of 13 non-roster invitees to this year's spring training in Clearwater, Florida.

Some of the players' names should be familiar to regular PhoulBallz.com readers. Top prospect OF Domonic Brown, relief pitcher BJ Rosenberg and starting pitcher Joe Savery lead the list of prospects invited to train with the big club this spring. Also invited are two of the players that the Phillies acquired in the deal that sent Cliff Lee to Seattle, Phillippe Aumont and Tyson Gillies. 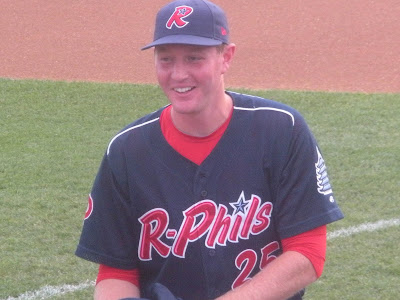 The obvious catching depth is simply so the Phillies have enough guys who squat in Clearwater to catch the countless bullpen sessions for the many pitchers who arrive to spring training early, and then later to fill out the minor league roster spots at triple A Lehigh Valley and double A Reading. None of them really stand a chance to make the big club unless it's as a backup if Carlos Ruiz or Brian Schneider are unable to play. Galvis is looked at as a "real deal" prospect and should be a guy to watch as he works his way to the Majors. Chavez, unfortunately, is a role playing, multi-positional infielder who could possibly take the role of Carlos Leon in the Phils' minor league system as the veteran guy who teaches the younger players and helps the coaches translate English-Spanish, when necessary. Chavez stands no shot at making the Major League roster. Wasserman, a 29-year-old career minor league pitcher is another guy who is there to compete, but has slim chances to be a big leaguer out of spring training.

Jay Floyd said…
BJ could really be a fast track guy who sees major league opposition in 2010. If not, I'd say he is guaranteed to debut in 2011.

He jumped from low A to double A (skipping Clearwater) in 2009 and didn't skip a beat.