By Jay Floyd January 07, 2010
On Tuesday, it was announced that long-time Expos and Cubs outfielder Andre Dawson was voted by the Baseball Writers Association of America to be inducted into the National Baseball Hall of Fame. Dawson will be inducted on July 25th, in Cooperstown, NY, along with former Major League manager Whitey Herzog and umpire Doug Harvey, who were both elected by the Veterans Committee in December.

The statistic that most people in the media are tossing out there, as pertaining to Dawson, is that he is one of three players in the history of MLB to hit at least 400 homeruns and steal at least 300 bases. The other two men are Barry Bonds and Willie Mays. That is obviously a very exclusive club and Dawson is quite deserving. In his 21-year career, Dawson hit 438 homers, drove in 1591 runs and had 2774 hits.

Not to take anything away from those who ARE being honored this year, but I feel as though it's time to honor someone who has been deserving for a long time. If you aren't familiar with Buck O'Neil, you should be. O'Neil was a long time negro leagues player...a good one not a great one...who managed in the same league, then later became the first black coach in Major League history. Keeping in mind that the negro league clubs played closer to a few dozen games each summer, as opposed the 150+ games that ML fans might be used to, O'Neil's career stats were respectable. He collected 355 hits in 362 career games, batting .288 in 12 seasons. O'Neil missed two seasons and part of a third serving in the US Navy in the 1940's. 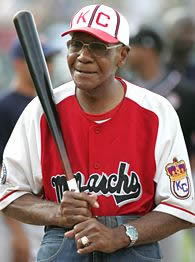 laying career and coaching landmarks aside, Buck's efforts to promote baseball, pass down the history of the game (especially the negro leagues) and keep the spirit of baseball alive should be what make him a baseball immortal. O'Neil was instrumental in the design of the Negro Leagues Baseball Museum in Kansas City. O'Neil was featured prominently in Ken Burns' documentary Baseball as the key story teller for many aspects of the negro leagues and early black ballplayers. O'Neil served as a member of the Baseball Hall of Fame veterans committee, before he passed away in 2006...the same committee that never elected him.

Surely, based on his playing and coaching numbers O'Neil wasn't elite. But he was surely among the top tier of men who have enhanced the sport off of the field. The Ford C. Frick Award is given annually to a broadcaster for "major contributions to baseball". If broadcasters who never played professional baseball can be honored and umpires are inducted as well, why not have a liaison or ambassador award for other individuals who have offered great contributions to the sport that we love?

Such an award could be given to a man like Ken Burns who, through his films, has documented history and elevated a lasting spirit of baseball like no one else. Or it could be given to iconic figures like Abbott & Costello, who, through comedy, have increased the adoration and appeal of the sport for many generations.

There are simply more people deserving of having their legacies commended by the National Baseball Hall of Fame. There are ways to make it happen as their board of directors can do whatever they like. How about an annual honor called The Buck O'Neil Impact Award?

Andre Dawson will be signing autographs at the Lakewood BlueClaws game on July 1st. Check out the BlueClaws Blog here.

Randy Johnson, a future Hall of Famer, announced his official retirement this week. The blog known as More Hardball features a Tale of the tape match up between two lefties- Johnson and Phillies' great Steve Carlton. Click this link to check that out.