Where Will Jim Thome Land? 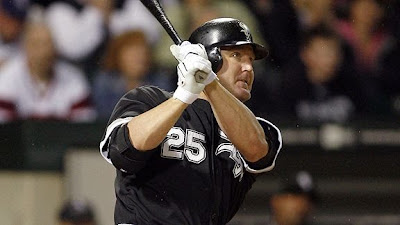 Some folks around baseball have felt throughout the offseason that Jim Thome would inevitably return to the Chicago White Sox and resume his duties as the team's designated hitter. Thome was traded by the ChiSox prior to last year's trading deadline to the Dodgers for minor league infielder Justin Fuller and cash. Thome appeared only as a pinch hitter for the Dodgers, down the stretch last year, and he managed to get just 5 singles in 20 at bats, including the post season.

Thome stated to Chicago reporters, at a White Sox charity function on Wednesday, that he'd come back to the White Sox if they called and wanted him. But, keeping things real, Thome added, "I want to play baseball. Right now, we're talking to a few teams, so we'll see what happens. It's been a slow winter in the market, so we're waiting to see what's going to happen and move forward."

So, what teams might Thome be negotiating with? Not the White Sox!

Chicago manager Ozzie Guillen spoke about the situation on Thursday. Guillen told the media, "Nobody is a bigger Jim Thome fan than me. But in the meantime, (Thome's departure) gives this ball club an opportunity to give more people more at bats and to be flexible in different ways."

"To me, it's easier and we get more production with the team we have now that way, Gullien added."

With full time DH's virtually at an all time low (only Boston with David Ortiz and Cleveland with Travis Hafner have DH's who don't also play a defensive position), Thome, who is unable to play the field very well, if at all due to health issues, may find it very difficult to find a job.

Thome is 39 years old and is 12th all time on the MLB homerun leaders list. I am sure there are teams who are, or will be, interested, but it remains to be seen who they might be and what money they might offer Thome.