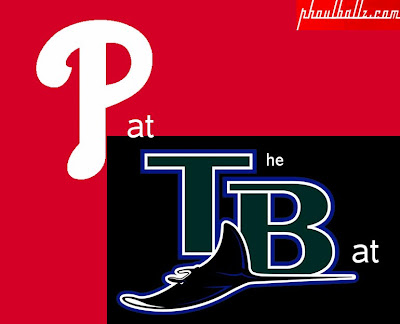 We all saw (and heard) the receptions that Pat Burrell and Adam Eaton got the other day at the Phillies' World Championship ring ceremony. Pat Burrell received the biggest reception of the day. It really had me wondering what exactly it is about Pat that phans love so much. His offensive statistics rank high on Phillies all-time leader boards, but Pat was never an all star and never won any individual recognition, as a Phillie. He was a sometimes-steady hitter, who learned to take more walks over his years, and had slumps as regularly as the weird guy in the cubicle next to me has belching fits and outbursts toward his computer ("Come awwwn! I hate you!"). Patrick the Batrick's performances against division rivals were not very outstanding, despite the misconception that he always killed the Metropolitans (.255 avg vs. Nationals, .249 avg. vs. Braves, .246 avg. vs. Mets, .243 avg. vs. Marlins).

Perhaps the affinity for Burrell can be attributed to the fact that he was the main player who got let go after the Phillies phinally won it all, and everyone pretty much saw it coming...including Pat himself. Maybe phans think he deserves better. Maybe it has a little to do with his love for the area and the full page ad he took out in Philly papers (a la Geoff Jenkins when he left Milwaukee) thanking the team and the phans. Could it be that the female phan base will miss their favorite baseball hunk and the men will miss wearing their "Man or Machine" t-shirts?

It could be a tons of reasons, all adding up to the point that Pat was our guy. He was "home grown" through the Phillies' system, had always been a Phillie and we like guys like that. Is that why phans were so forgiving toward Brett Myers with his spousal/law troubles? Is that why phans let it go so quickly after a slightly ailing Colbert Hamels shunned the concept of pitching, in late 2007, if the Phillies weren't in contention? It could be. We're easier on the guys who've always been in the organization.

Which brings me to Adam Eaton. Eaton was once a #1 draft pick by the Phillies. He left, bounced around with other teams and became a serviceable starting pitcher, which got him big bucks, when then GM Pat Gillick signed him as a free agent and gave him millions of dollars. I certainly won't imply that Eaton does not deserve a poor reception by Philadelphia phans. I just think a guy who was always a Phillie, would get more of a pass.

Speaking of passes, and lighter treatment, is it time to let up a bit on Adam Eaton now? I feel that the ring ceremony boo shower made the point, and no further examples would be required, if Eaton ever paid another visit to Citizens Bank Park. I saw this piece of jewelry recently: "A person reveals his character by nothing so clearly as the joke he resents." Adam Eaton played along and took it with grace. He enjoyed the ring ceremony and the infamous Philadelphia "welcome", by waving back to the crowd as if he knew it was coming, knew why he got it and admitted he may have deserved it. That seems like an apology to me.

MFWSMVP Cole Hamels makes his season debut tonight. Cole says it's the last National League park for him to pitch in. Other than that, there's little going on in Phillies news today...day off yesterday.