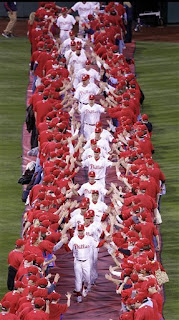 The last time we saw the Phillies take the field at home on national TV, Harry Kalas topped the night with his rendition of High Hopes. Sunday night they returned to the nation wide stage, and got shut down by Braves starter Derek Lowe. Hey, remember when our Phillies were rumored to be interested and were among the final suitors for Lowe? Yeah, you do. Also, do you remember when our Phillies signed left handed hitting Raul Ibanez because, as Ruben Amaro Jr. stated, the Phillies feared returning the same team to the field in 2009? Well the lefty who replaced righty Pat Burrell, in the lineup, allowed Braves lefty reliever Mike Gonzalez the best possible matchups versus three straight lefty hitters in the Phils' lineup, when he got to face Chase Utley, Ryan Howard and Ibanez in a row, and halt the Phils' 9th inning rally.

I was surprised to see Charlie Manuels' lineup that featured those three straight lefties. Switch hitting Shane Victorino could easily bat 2nd, while Jayson Werth could bat 5th, behind Howard, to break up the lefties, with Ibanez taking the 6th slot. The lineup in the 9th inning would then go Switch, Switch, Lefty, Lefty, Righty, Lefty following Eric Bruntlett's leadoff double. This gives minimal advantage to the bullpen matchups for the Braves. Leaving three straight lefty hitters to face the Braves' lefty closer in the 9th inning is not the best managing on Charlie's part, even if those hitters are the team's "big three".

IronPigPen featured a nice PhoulBallz.com reference over the weekend. Check that out right here.