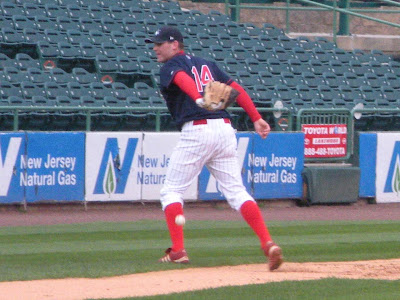 PhoulBallz.com spoke with Lakewood BlueClaws third baseman Travis Mattair the other night. He was kind enough to answer some questions.

I've matured as a hitter. I got myself in some brutal counts last year by just waving at bad pitches that I shouldn't have been swinging at. So, I've matured that way. I'm taking more pitches, that I should be taking, and swinging at the ones I should be swinging at. I've been fouling a lot more balls off with 2 strikes, which is good in a way- you want to put the ball in play. But, I mean, I've had about 5-7 just 4 pitch walks where I just go up there and- 4 pitches- I'm on base. But other ones I feel I'm crediting to maturing as a hitter more than anything.

- Broadcaster Greg Giombarrese pointed out to me during the game that you lead all of the minor leagues in walks so far this season. Were you aware of that?

I knew I was leading the SAL (South Atlantic League), I didn't know about the entire minor leagues. That's great.

- What are some of your main goals going forward in 2009?

- I asked (manager) Dusty Wathan, a couple weeks ago at the open practice, who might be his main suspect to lose first, due to promotion, and while he was hesitant to name players, the one name he did mention was you. Can I get a reaction from you about that?

I can only control what I do. I mean, if I get moved up, that'd be great. If I don't and I stay here, I've still got a jersey on my back, which means I have an opportunity to go to the big leagues, but I mean a promotion would be great. But I just gotta go out and play as hard as I can every day and the rest will take care of itself.

I'm into Christian music. I like Shawn McDonald, Casting Crowns. I like a bunch of Christian music as well as I'm into Lil' Wayne and the rap as well. I go with a variety.

- Do you have any rappers on the team?

Everyone thinks they're a rapper. Tyler Cloyd thinks he's a rapper. (Cloyd walks up and interjects- No, not even close!) I'd say I'm the best rapper on the team.

We agreed that maybe I'll ask Travis to bust some lines next time we meet.

- I coach Babe Ruth Baseball. Can I ask what advice you would give to teenagers who might hope to play beyond high school?

Never let anyone say you can't do something, if you have a dream and you want to do it. It takes a lot of work to get to this point, and I have a lot of work to continue, to make it to the big leagues, but if you really want something you can do it. And I think all of us in this clubhouse are proof of that. I mean, we all had a dream, we all played in high school, we all wanted this dream and we just put in hard work and that's why we're here. But don't let anyone ever say you can't do something.

- And one last one, which Major League park would you most want to play in some day?

Fenway for sure. I'd like to play in Safeco as well, since I'm from Washington and that's where I grew up watching, so...I actually got to play in it a couple times, but being a big leaguer playing in that ball park would be fantastic.


Tune in next time to hear MC Moose Mattair and Grand Masta Ty-C bust the mad flow, yo.

how about a link exchange?

If you would like to talk some baseball, I sit in 104(1st row) and just ask my usher, Dave on the aisle where "Superfan" is