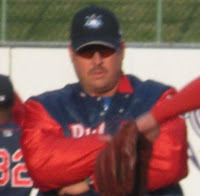 
- I asked Coach Bob to comment on Jason Knapp's sparkling 7 shut out inning/14 strike out performance on Tuesday.

Ah, it was impressive. Impressive. I mean you see a guy that throws that hard, that young, and has command of his three pitches, it was fun to watch.

He has a fastball, a good curveball and his third pitch is his changeup. But, ya know, when he had them all working together, and you throw a lot of strikes, it's fun to watch. They were late on his fastball, he overpowered hitters at times, and he changed speeds enough to where they never really caught up to his fastball. It was really impressive to watch.

- How much have you had to do with Knapp upping his level of performance?

I think it's all him. I mean, he's tremendous at making changes. The pitching coach is here just to guide him in the right direction, but he's the one that has to do it.

- What have you seen out of the pitching staff so far that you like most, for success going forward?

For the most part, guys at this age level, in my experience, have a hard time throwing in(side). We also throw a lot of strike at this level. We have a lot of guys who can throw some strikes for the most part. But the thing that's really impressed me a lot is a lot of guys can pitch in. And that's hard to teach sometimes at this level 'cause they're afraid of hitting guys and putting guys on base. They're so oriented about throwing strikes and they're so not oriented about throwing non-strikes. And being able to double up on their pitches is really impressive, so we've got a good group of guys here.

-(Coach Bob used to coach in the Pirates organization prior to coming to Lakewood) Can I get you to comment a little bit on the transition of coming from Pittsburgh to the Phillies organization?

It's been really good. The people here in the Phillies organization, when I first came over, and when I did my interview, made me feel like I fit right in and that's the type of people they are. I mean they're just tremendous. Pittsburgh made a lot of changes over there, and it wasn't because of the baseball stuff as much. It was more of a personal thing is why I left. But it was a big change for me. But coming over here with Philly, it seems like, just that I knew quite a few people that were already over here.

- What is the fun level like working with the BlueClaws so far this year?

I think this team's pretty loose. We have a good group of guys where everyone kind of gets along and they're willing to harass everyone a little bit, in a fun way. And it's just a fun team to be around. I mean, it's still early and there's going to be changes, but right now it seems like a pretty good atmosphere being in this club house.

- Is there anyone on the pitching staff that you suspect might be your first to lose due to promotion?

No, I just think we need to do our stuff here.

- I then pressed, trying to get coach Bob to toss a name out...

If there is, it might be someone who's a little older. We have a young pitching staff, so they're probably going to stay here the whole year. And if not, they'll probably go to Williamsport (short season rookie league ball) when Williamsport starts. We don't know who that's going to be.

- Lastly, is there anyone on the pitching staff that projects to have, or currently reflects any, traits of a major league Phillie right now?

Well, I mean obviously Knapp has a heck of an arm. And we have some other guys, (Jesus) Sanchez has a chance and he's just coming along. (Jon) Velasquez has been throwing the ball very well and could play at higher levels. (Justin) De Fratus, 'cause he throws a lot of strikes could play higher levels. (BJ) Rosenberg, same thing. I mean there's a handful of guys...it's really hard to project how far they'd go. But the one that, if he stays healthy and keeps improving like he is, Knapp's gonna be a big leaguer in a few years.

Obviously, with the last question Coach Bob thinks his BlueClaws pitchers are incomparable to any Major League Phillies pitchers (I choose that explanation, rather than assuming he missed the point of the question, because I like him and I'm not mean to people who give me interviews).

This has been PhoulBallz.com, the BlueClaws pitching staff of Phillies blogs. (I insist you take that as meaning this site is incomparable, not necessarily 4 promotions away from the big time...thanks)