The Brewers are Back 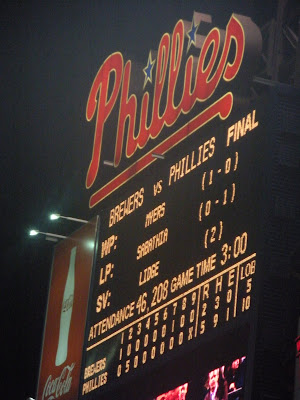 Last year, the Milwaukee Brewers visited Philadelphia twice, at crucial points. In September, the Brew crew came in for a big weekend series, which they entered as the Wild Card leader. After being swept by the Phillies, they left town tied for that lead. The Brewers then returned for two games in the National League playoffs and lost both of those match ups as well, before being eliminated by our Phillies, 3 games to 1.

The Brewers are scheduled to begin a three game series in Philadelphia Tuesday night when Jamie Moyer faces Manny Parra. Moyer lost the only game to the Brewers in that NL division series in October. Moyer lasted just 4 innings in that game, throwing 90 pitches, and surrendering 2 runs. In his career, Jamie is 9-5 with a 3.63 ERA against the Brew Crew. Parra started one of the games in September in Philly last year, and gave up 5 earned runs in 1 1/3 innings.

Game 2 will pit Joe Blanton against Braden Looper. Blanton won the series clinching game against the Brewers in game 4 of the NLDS last October. In six innings of work, Blanton surrendered just one run and struck out seven. Looper, in his career, has faced the Phillies 60 times, but only started against them twice. Overall, he has a 5.53 career ERA against the Phils, and a 4.13 ERA in 26 appearances in Philadelphia.

On Thursday, Colbert Hamels should face Dave Bush in a Business Persons Special. Hamels, of course, won game 1 of the NLDS last year by throwing 8 scoreless innings. That was a day game. Hamels' career ERA in day games is over 1 1/2 runs higher than it is during night games. One more note on Hamels...he has stuck out 11 Brewers in a game in each of the past two seasons. Bush has made 6 starts in his career against Philadelphia, but has no record and a 5.88 ERA in those games.

Cold- Corey Hart is 1-for-13 in his career against Cole Hamels.
Jimmy Rollins. But you knew that already.

In case you missed it, the Phillies' Mothers' Day game on May 10th has had its start time changed to accommodate TBS television scheduling. That game will be TBS's national game of the week against the Braves.

And on the subject of schedule changes, make note of this road switch also. That extra day after the all star break is no more. The Marlins announced last week that due to the NFL scheduling a Monday night home game for the Dolphins, the game for September 21st against the Phillies has been moved up to July 16th.