Nothing Minor About These Guys 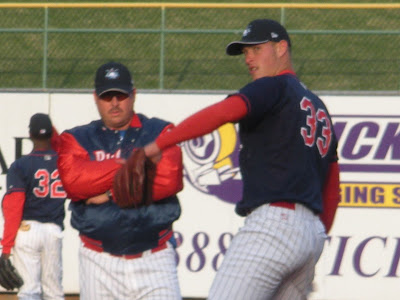 Jason Knapp
Today's pitching performances from Phillies' minor leaguers were sparkling, exciting and phantastic, to say the least. Gems all around from the Phillies' deep corp of minor league arms, and here is a full report.

Carlos Carrasco had a solid outing for the Lehigh Valley IronPigs. Against the Syracuse Chiefs, the Nationals' triple A affiliate, Carlos threw 7 innings and allowed 3 runs on just 3 hits, walked 1 and struck out 10.

Reading Phillie Tyson Brummett faced the Altoona Curve, the Pirates double A affiliate. Brummett gave up just 1 earned run on 5 hits, in 7 2/3 innings, walking none and striking out 5.

After all those, the best start of the day came this morning from Lakewood's 18 year old prospect Jason Knapp. Knapp, a New Jersey native, tossed 7 shut out innings against Cleveland's Lake County team, walking one, surrendering 1 hit and striking out 14. Those 14 strike outs tied the BlueClaws' team record set by Robinson Tejeda in 2001.
Combined, that's a 1.29 ERA by Carrasco, Brummett, Drabek and Knapp in 28 innings pitched with 39 K's. Top that off with an 11-4 rain delayed victory by the Major League Phillies, and all seems phine in Philliesville.
******************

The Phi Delta Theta International Fraternity, headquartered in Oxford, Ohio announced today that their annual Lou Gehrig Award will be given to Phillies outfielder Shane Victorino. The award is presented to the MLB player who best exemplifies the giving character of Hall of Famer Lou Gehrig, who was a member of the fraternity's Columbia University chapter. The award was first presented in 1955 and is permanently maintained at the National Baseball Hall of Fame and Museum in Cooperstown, NY.
Shane will receive the award when members from Phi Delta Theta and the Philadelphia Chapter of the ALS Association visit Citizens Bank Park prior to the game against the Metropolitans on July 4th. The presentation will be part of "4ALS", a day celebrated throughout Major League Baseball to honor the 70th anniversary of Lou Gehrig's famous "Luckiest Man" speech and to raise awareness for ALS (Lou Gehrig's Disease).

Harry Kalas, a Phi Delta Theta member, was originally scheduled to participate in the presentation. Kalas has served as a member of the Gehrig Committee since 1994, helping select the winner each year.

come comment and tell two Baseball Stadium Haters to jump in a lake (one is Muhlenberg College professor)
April 22, 2009 at 8:09 PM