Ruiz Hurt, Marson Could be Recalled 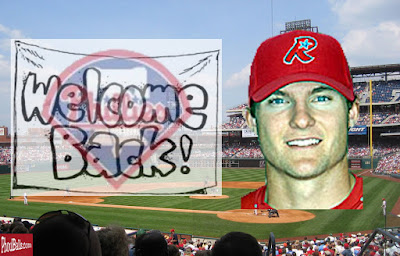 Carlos Ruiz strained his right oblique during Friday's game against the Rockies and was replaced in the game by Chris Coste. As of this writing it is still morning in Colorado and a decision has not been made by the team whether or not to place Ruiz on the disabled list. However, team representatives have confirmed that Lou Marson is traveling to Colorado to be with the team, in case Ruiz is not able to stay on the active roster.

The Phillies are off to their usual slow start, with a 1-3 record after their loss in the Rockies' opener. There is plenty for phans to be concerned about at this point. I am not suggesting we all go into a panic, I am simply stating that the "they always do this and bounce back" attitude should not be the prevalent motto of the week. I am also not suggesting that the Phillies don't deserve some slack after winning the World Series, I am only saying that those sorts of passes should be limited to how critical we might get, vocally...and shouldn't restrict us from addressing the issues that are so obvious.


A team can't win if its lead of man doesn't get on base. A lead off batter sets the table and needs to be on base so the hitters who follow him can drive him home. Jimmy Rollins' .158 on base % is awful. J-Roll's weak performances this week stand out like Charlie Manuel at a dieticians seminar. Ryan Howard grounded into three double plays yesterday. I do not have resources or time to research how often that feat has happened, but I don't think I've ever noticed a player doing that in a game I watched. Ryan Howard is 0-for-8 with runners in scoring position this season. That's an average of twice a game, he's missing chances to drive in runners from scoring position. Cole Hamels' velocity is way down also. He's been maxing out his fastball around 86 miles per hour. That could spell trouble for the young ace, if he takes much longer to get back to last year's form. His usual high speed for his fastball is in the low 90's.

The Lakewood BlueClaws are auctioning off 4 passes in the press box, with lots of press-like perks, for their April 24th home game. Check out the auction right here.