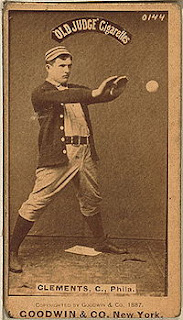 Most avid fans of baseball will know that there are certain positions on a field that left handers are not welcomed to play. The main reason it's less than ideal for lefty arms to play shortstop or third base is that the fielder must turn his body to throw to first base. The extra time would give a runner an extra step, in most cases. The same applies to second base as well. The catcher position is another one where lefties are not very welcome. Estimating, going back to the 1800's, more than 8,000 players have played catcher in the major leagues. Just 33 of them have been left handed. Of that small group, 10 played in only one game (likely an emergency situation) and 16 of them played in five games or less, plenty of which were players better known to play other positions. Of the 33 lefty catchers, 10 played in 50 or more games, only 5 played in more than 100, and just three played more than 200. One of those three was John J. "Jack" Clements, who caught most of his games with the Phillies.

Jack Clements was a big league catcher from 1884-1897. He holds the record for games caught by a left handed player, at 1,073. Clements was even around in the days before the Phillies had that name, and were known as the Quakers.

Clements was one of the best catchers of his era. Defensively, he led the league in putouts three times, and in double plays and fielding percentage once each. With the bat in his hands, Clements finished in the top 4 in batting average 3 times. His .394 batting average in 1895 still stands as the highest single season average by a catcher.

During the 1890 season, Clements made some waves as he told manager Harry Wright that, after catching both games of back to back double headers, that he would only catch one game of the next day's double header. The team only had one catcher at the time and Clements was overworked. Supposedly, Wright then cancelled one game of the twin bill to appease his catcher.

Earlier that season, Wright fell ill with temporary blindness, and Jack Clements served as player-manager over a 19 game stretch, winning 13 of those games.