Harry in our Hearts 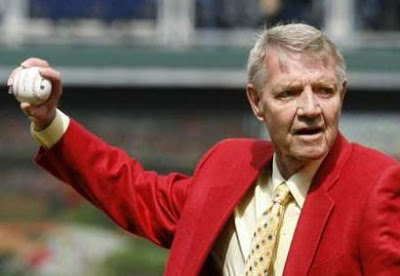 There were no new postings yesterday on PhoulBallz. This was partly as a day of silence, and partly because it was difficult to muster the enthusiasm to write anything worthwhile, after Harry Kalas passed away. I received an e-mail with a great Richie Ashburn and Harry Kalas story from reader Nikki. With the permission of the author, I'd like to share it with you all.


Picture it, Veteran’s Stadium, 1996 (possibly '97) Phillies ALS Phestival. I had found out about a month prior that Richie Ashburn was going to be signing autographs in the broadcaster’s booth. Father’s Day was coming up, and even though I personally did not know much about Richie Ashburn, I thought the autograph would be a nice gift for my Dad who grew up in Philly, then living in California , and was an Ashburn fan.


So, after waiting for entrance into the stadium, I get on line- first one there. As more people came, I realized I was definitely on the younger end of the age range. Just about everyone else in line had white hair, or was close to it. I was probably 19 years old at the time, and was just coming into my Phillies phandom. A good while later they opened the doors and asked me to walk up to the table. I had my baseball ready and was excited to get it signed.


As I walked up, Harry Kalas (who I was familiar with) was sitting next to Richie and said to him “See Whitey, its not just old guys who want your autograph. Look at this pretty girl, first in line too!” I then replied with “Actually, this is for my Dad. I didn’t really know who you were.”
Well, Harry starts cracking up; Whitey is laughing and pretends like he is going to leave. I just stood there not sure what to do. I didn’t even know this guy, I just wanted to get the autograph and get out of there.


Richie then tells a photographer to come take a picture of him with the youngest fan he was going to have there all day. So we take the picture, me, Harry and Whitey. He signs the ball for my Dad, tells me to tell him to have a great Father’s Day, and thanks me for one of the best laughs he had all day.


They were all nice guys and everyone seemed to get a kick out of the fact that I really didn’t even know who Richie Ashburn was. I found my hubby (then boyfriend), who had been waiting for other autographs, and told him what happened and he couldn’t believe I said what I said, but hey, I was just being honest.


The next year (or later that same year), when Richie passed away, my picture with Harry and Ashburn was spotted on a Sunday pre-game photo montage tribute to Richie. Then, years later, during a tribute to Harry Kalas at the Vet, all of a sudden there is my picture with Harry, and Whitey on the video board. We were shocked both times (the only times the picture has been seen), but it was quite an honor to have been on the TV screen and Phan-a-vision with two legends of Philadelphia Phillies baseball. I’m just glad I was having a good hair day.

Our Phillies have announced plans to honor Harry Kalas this weekend. Recognition prior to this Friday night's game is being planned, and is still unannounced. Phans with tickets should arrive early. Also, this Saturday, beginning at 8am, phans will be permitted, on a first come, first served basis, to pay their respects. That will last until 12:45, when phans will then be directed to take seats for an on-field tribute that will begin at 1pm. Tickets are not required. Game time on Saturday is 7:05pm, so the tribute will be held separately from the game.

Also, the Phillies plan to wear an "HK" patch on their jerseys for the remainder of the season. The black circular patch will reportedly be placed on the left chest, over each player's heart.

*******************
UPDATE...
Plenty more released about Harry Kalas today...including Harry's cause of death and a full list of tributes on Friday. My favorite acknowledgement that the Phillies are planning, to pay homage to Harry, is that his signature "Outta here!" call will accompany the ringing of the Liberty Bell following each Phillies homer throughout the remainder of the season.


wish i could be there

Jay Floyd said…
With no dad around, I really feel like I learned the game of baseball from Harry Kalas and Richie Ashburn.

IRONPIGPEN said…
The company I work for, we do stuff for IronPigs.

We have been working on some stuff I can't really talk a whole lot about, but revolves around Kalas for IronPigs.

The girl dealing with that had the stuff out today. She's not a baseball or sports person so there's a good chance she doesn't even know.