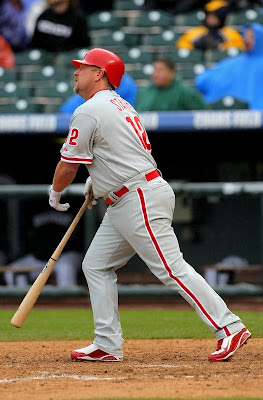 In case you missed it and don't know exactly what I am talking about, our Phillies overcame another early deficit on Sunday, after Chan Ho Park continued the pitching rotation's lackluster ways. Stairs put the Phillies ahead, for good, in the 9th inning with a 2-run homer.

The triple A Lehigh Valley IronPigs are off to a 0-4 start. John Mayberry Jr. is just 2-for-15 (.133 avg.) in the opening 4 games. On the other hand, the guy Mayberry Jr. was acquired for, Greg Golson, is 3-for-10 with the Oklahoma City Red Hawks, the triple A affiliate of the Rangers.

The double A Reading Phillies have started the season 2-1, but have yet to hit a homer in those three games. But the combined starting pitching efforts of Joe Savery, Tyson Brummett and Vance Worley have a 2.54 ERA and 16 K's over 17 2/3 innings pitched.

And one last Phillies phact for you. Only once since 1993 have the Phillies ended the opening week of a season with a winning record. That year was 2001.

mvr joe said…
c'mon jay ballz i was expecting "stairs steps up" for the headline or something......but i guess man crush is appropriate too.