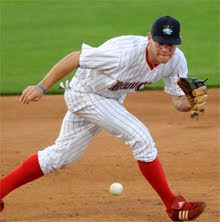 Phillies minor league third baseman Moose Mattair checked in, once again, to give readers an inside look at his journey back to baseball, after taking a year off to try his hand at Division I college basketball.

Moose and his cousin Eric drove together from Washington state and stopped in central Florida to move Moose into his temporary Winter/Spring residence before wrapping up their bonding with a few days in Miami. Moose is now back in the Clearwater area and phoned in with a report on his past week, or so, in Florida. To read Moose's previous diary entries click here and here.


Miami is an awesome place...just a fabulous place. The weather was beautiful. I got a nice sunburn, which prevented me from getting the tattoo that I originally planned to get on the trip. I wanted to add on to the cross that I have on my back, but I was just too sunburned that I couldn't get it. We went around the city and took in the beach and went to a couple different spots. It was a load of fun, but that place is quite expensive and my cousin and I weren't looking to spent everything there, so we came back (to the Clearwater area) a day early. Miami is definitely a spot that I'll go back to, for sure.

My cousin Eric headed back to Washington on Sunday morning really early. He's home, safe and sound. He had to get up for work today around 4:30. He ended up getting his tattoo, while he was down here with me. He flew back. There was no way you'd get him to ride in a car any longer than we did for the trip down here.

Initially, when I got to central Florida to move in and work out a couple days last week, I hit in the cage and did some pretty intense workouts with our trainer Shawn Fcasni in Clearwater. Tuesday was upper body day and Wednesday was lower body. Shawn has us doing this new workout routine from Japan that the speed skaters used to do over there to add bulk and endurance to their muscles as fast as they possibly can. It took a toll on me. It's a different workout and got me pretty sore for the week in Miami.

Overall, it was great to see everyone when I got there and give them all a hug...some of my best friends that I haven't seen in a long time. Plus with Shawn Fcasni and all the head honchos and everybody, it was fun to see them and it seemed like they were excited to see me, which made me feel more than welcomed back and I was just really thrilled.

It's just great to be back and it's phenomenal to see everyone. I am glad to get back into a baseball routine and I am confident I'll be playing baseball for a long while and it's so good to be back. I look forward to spring training and the season as well. I feel like good things are in my future.

It's great to see the work ethics of some of these guys that are ahead of me, like the Halladays, the Howards, the Browns...it's great to be here working out with them, because you get to see what kind of work you have to put in, in order to be great. I'm really soaking that in and really trying to imitate what they're doing because that's what you have to do to be great, is what they're doing, and that's what I want to be- great.

I'm so glad that I've come down early. I am planning to go five days a week, so starting today I'll be there Monday through Friday until spring training officially begins.

As far as my routine, I went to the ballpark today around 9:30 and hit off a tee by myself for a little while and then had a full-on lifting workout and then took a little break. Then about 1, I took batting practice with Ryan Howard, Domonic Brown and Anthony Hewitt. Howard took time afterward and talked to all three of us, for what must have been 45 minutes, about mental preparation and thinking positive. I learned more in that hour than I've learned in a long, long time in baseball. In that situation, you're so intent and focus on someone that you've looked up to and that is ahead of you, when they're speaking, that you soak everything up that they're saying. It was an awesome experience.

It's a lot of fun. It sounds like I'll be doing more of that, which is very exciting, and then soon I'll start working on some fielding. It's a full day at the ballpark, I couldn't ask for more. If I'm not at the ballpark, I'm not doing very much, so it's good thing to be there and getting my work in.