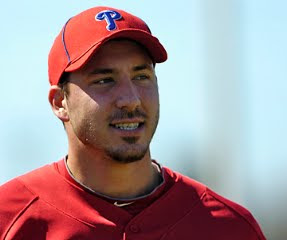 Phillippe Aumont, the second prospect acquired from the Mariners for pitcher Cliff Lee last off-season to appear on this countdown, is back in a position more comfortable to him after experiencing some hiccups in his progress during the 2010 season. Upon joining the Phillies organization, higher ups decided to move the young reliever into a starting role. Aumont struggled as a starting pitcher during his first season in the Philadelphia system, but remains a talented pitcher worthy of consideration as an excellent prospect.

A first round draft choice (11th overall) by Seattle in the 2007 amateur draft, Aumont was a highly regarded hurler when he was traded to Philadelphia in 2009.

In 2008, his first season as a professional, Aumont appeared in 15 games, 8 of which were starts, posting a 4-4 record with a 2.75 ERA and 50 strike outs in 55 2/3 innings in the Class A Midwest League. The following season, Aumont appeared exclusively as a reliever in High A and Double A, going 2-6 with a 3.88 ERA, 16 saves and 59 strike outs in 51 innings. Both seasons were shortened by injuries as he landed on the disabled list twice in 2008 with elbow soreness and missed time in 2009 after breaking his hand when he punched a wall following a blown save.

Also in 2009, Aumont pitched for Team Canada in the World Baseball Classic, retiring MLB All-stars David Wright, Kevin Youkilis and Curtis Granderson, in order, to escape a jam in a game against Team USA.

In Aumont's first season with the Phillies organization, he went 1-6 with a 7.43 ERA as a 21-year-old in 11 starts with Double A Reading, before being demoted to High A Clearwater, where he improved his numbers a bit, going 2-5 with a 4.48 ERA. With Clearwater, 10 of Aumont's 16 appearances were as a starter.

The silver lining of Aumont's bust of a season in 2010, when he posted a 3-11 record and a 5.68 ERA in 27 combined games between two levels, was that he pitched more innings that season (122) than he had in his previous two seasons (106 2/3) as a professional. That gave Aumont plenty of time to work on his pitches and provided the Phillies with significant opportunities to see their highly touted prospect in action. Philadelphia's clear decision to return the Quebec native, Aumont, to the bullpen was a direct product of his struggles, so if he achieves success at higher levels as a reliever, the rough 2010 season will have been well worth it.

The 6'7", 255 pound right-hander certainly has the size that could intimidate opposing hitters. He has a pitch repertoire that includes a 4-seam fastball that is regularly clocked in the mid-to-high 90's and a plus "slurve" that has very good movement. Aumont also mixes in a change up that rounds out his arsenal of weapons. However, if Aumont sticks to a relief role, it is likely that he could focus on using his two best pitches exclusively, as he wouldn't regularly face batters more than once a game. Some of Major League Baseball's best closers are solid examples of success with a two-pitch selection.

Thanks to Aumont, and Phillies general manager Ruben Amaro Jr., fans were introduced to brand new baseball speak after the 2010 regular season, when Amaro told me, of Aumont, "We don't judge (his) abilities necessarily by performance, but (instead) by progress and he's still a young kid. Prospects sometimes take a long time. The pudding has not been made yet, so it's really a matter of time for (him) to continue to develop. We still believe in him to be a fine prospect."

So, consider Aumont "a pudding prospect", whose consistency hasn't quite developed yet, but is capable of becoming a gratifying home made treat, once given the proper allotment of time to refine.

Anonymous said…
Aumont sucked last year. The team is lucky they won't need him, with the staff they have now.
February 1, 2011 at 2:13 PM