Take it to the Bank

By Jay Floyd January 22, 2011
The following is a post from ballpark aficionado Kurt Smith. Kurt, a New Jersey resident, is the creator of Ballpark E-Guides, a series of baseball venue reviews that provide extremely detailed rundowns of various MLB facilities.

From time to time, Kurt expects to join PhoulBallz.com to talk about professional baseball, its cathedrals and whatever else might be on his mind.

Right now, though, check out information from Kurt about his excellent downloadable booklet of everything there is to know about Citizens Bank Park. 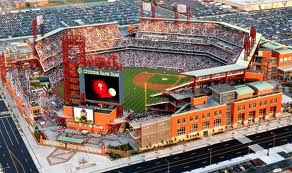 Currently I live in Turnersville, NJ, just a 20-minute drive from the sports complex in South Philadelphia. I saw plenty of Phillies games, Flyers games, and concerts at the Vet and at the Spectrum. And I had no truck with any of it then. But I will say it looks a heck of a lot nicer now. Especially Citizens Bank Park.

The idea for writing a guide to the Major League ballparks came to me while lying in bed one night. I thought about my frequent trips to Camden Yards (I’m a displaced Orioles fan), how I had a favorite parking spot, a favorite outside hot dog vendor, saving money buying T-shirts and peanuts outside, and how knowing these things made the experience more enjoyable, and how it would make a great book.

But instead of Baltimore, I decided Philadelphia’s Citizens Bank Park would be a good test chapter, partly because it’s so close, but also partly because, for some reason, outside vendors are nowhere near as prevalent at CBP. So I knew it would be a challenge.

Researching Citizens Bank Park resulted in the beginning of a series of recurring kick-myself-in-the-head moments. I didn’t know about better parking, the discounts on food, the savings on group tickets, the NovaCare parking lot, the chili at Harry The K’s, the Schmitter, Campo’s, McFadden’s, the Taxi Crab, using the SEPTA train (I had never done that), and even using a different exit off of the interstate to spare myself traffic.

When I attend a Phillies game now, I know to save money using the Broad Street Line if I’m by myself. But bringing a crew I know exactly where to park and get back on the road in no time. I’m not much of a drinker, but if I were, I know how to get a beer for less than half price. If not, I can get a soda for free. I know how to avoid the lines for things like Chickie’s & Pete’s crabfries. And to bring mustard packets for the less expensive soft pretzel outside.

Not only is it easier for me to go to a Phillies game now, I’ve learned to experience all of the extra touches, like the Schmitter sandwich. And I was surprised at all I had been missing, too.

The only thing I love more than going to a ballgame is going to a different city to see a ballgame. And now my second favorite thing is twice as nice. A better ballgame experience for less money; well worth all of the time.

Unfortunately, writing a book of all of the ballparks including all of this insider information would take so long that it would be obsolete at the time of its release. So instead, I turned it into PDF-format downloadable guides for each individual ballpark—under the fairly obvious name of Ballpark E-Guides. And I’ve included everything I’ve learned about Citizens Bank Park in the Citizens Bank Park E-Guide. If you were like me and just getting tickets and parking in the lot and getting a hot dog, you will be surprised at how much you did not know—and how much time, money, and aggravation you could save. I certainly was.

If you love the home of the Phillies as much as I do, try downloading a Citizens Bank Park E-Guide for just $5. It will pay for itself in many ways…and you can take it to the Bank!