By Jay Floyd January 11, 2011
Courtesy of Dave Gershman, author of the MLBlog SPANdemonium and contributor to another site that I write for known as 1BlueJaysWay.com, here is a recent interview with the Phillies' newly acquired minor league second baseman Albert Cartwright. 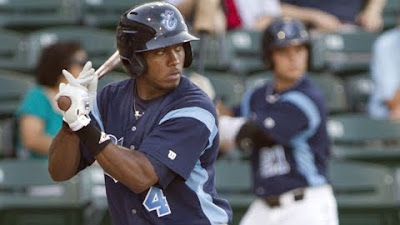 Talk about the transition from class High A Lancaster to Double A Corpus Christi and what adjustments you had to make.

Lancaster was a good league with a lot of good pitchers, but I thought when I got to Corpus the pitcher had a better plan and didn't stray away from it until you made the adjustment yourself.


Describe what you think is the biggest part of your game and how you can improve upon it.

The biggest part of my game is my speed, so I try to work it into my game the best that I can, meaning; taking the extra base, bunt, tagging up when necessary. Anyway I can make the defense uncomfortable that's how I try to play this game of baseball.


You set the Cal League record for most triples in a game. Whats a record you'd like to break at the Major League level?

Setting a Cali League record is a big accomplishment that I cherish dearly and my biggest concern is to help a team win at the Major League level. But if any record stands out at me it's the stolen base record.


What were some of the highlights of the 2010 season for you?

Two highlights that stand out to me from 2010 are the game I set the record for most triples and the game I hit my first career walk off base hit.
I can remember coming to the plate my third at bat wondering if I'm going to get anything to hit and after I hit another triple- hearing the cheers from the crowd. My biggest accomplishment of 2010 is hitting a walk off to win the game bottom of the 9th at home. Walking to the plate telling myself just get a good pitch over the plate and sure enough, I got a curveball down the middle.


What are some things you're doing this off-season to prepare you for Spring Training and the upcoming season?

Preparing myself mentally and physically to endure the the long brutal season ahead of me. Pushing yourself in the gym and putting time on the field and in the batting cages. Putting in time gets me ready for the season.

You were drafted in the 36th round and are now one of the Astros better prospects. Describe the journey it's been all the way from Polk College to where you are now and did you have to turn many heads after getting drafted much later than most?

Getting drafted in later rounds is definitely harder. You don't get the chance or opportunities a early round pick would get, so it puts more pressure on you to perform. But I would say once you go out and do what you got to do, on and off the field, your chance will come where you can show your talent now once you get your chance to show what you can do, you have to run with it. And I think with the opportunities I got I turned a few heads. Polk Community College baseball program, led by former head coach Joe Arnold and assistant coach Brian Kraft, got me prepared and helped shape my overall game to take it to the next level. And by listening to the Houston Astros coaching staff and putting everything together, it helped mold my game to what it is now.


Who are some of your biggest idols and do you ever seek help from current Astros?

My biggest idols I would say is my mother Patricia Cartwright and my father Albert Cartwright. I learned early in my life, just by watching them go out and handle their business waking up early in the morning before the sunrise in the morning just to provide for me and my brother Cyril and sister Amanda. My parents did what it takes just to make sure that we had anything they didn't have as a child and I commend them for that. The past two seasons I had the the opportunity to have the same manager Tom Lawless, who I look up to and who helps me out with my overall game, from hitting to defense


Toughest pitcher you've faced in college and in the minors?

Toughest pitcher that I faced in my short career I would say is Matt Latos, when I was as at Polk and he was at Broward Community College.


When going through the draft process, which team were you hoping would draft you, and was the signing process somewhat hard or lengthy?

During the draft process, it was more of a "wait to see who will take me" more than "I hope a certain team...". The signing process was a bit lengthy, but nothing too bad. I was leaning more on going back to school than signing in '07, so after a week or two after being selected by the Astros, I had a conversation with my dad and after that, I decided I'll sign with the Houston Astros.