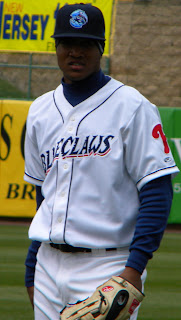 In March, 2009, Domingo Santana was signed as a 16-year-old free agent out of the Dominican Republic. At the time, the Yankees were also interested in Santana and it took a $330,000 signing bonus to lock down the youngster.

At 6-feet-5-inches tall and weighing around 205 pounds, Santana possesses one of those athletic and projectable frames that the Phillies organization loves.

Santana, primarily a right fielder with a very good arm, made his professional debut as a member of the Gulf Coast League Phillies in 2009 and posted great numbers. In 37 games, Santana batted .288, slugged 6 homers, drove in 28 runs and posted an .897 OPS. His homerun total in 118 at bats, at age 16, was extremely impressive, especially considering the rest of the GCL Phillies roster mashed only 11 homers in 1,744 at bats. Members of the media and scouts alike saw elite power potential in the well regarded teenage phenom.

In 2010, the right-handed hitting Santana started the season as a 17-year-old with Class A Lakewood. He struggled a great deal there, batting .182 in 49 games with 76 strike outs in 165 at bats. Santana was moved to short-season Williamsport, once their season began in June, despite having spent many hours working one on one with Lakewood hitting coach Greg Legg in the BlueClaws' batting cages. His offensive production improved a bit as a member of the Crosscutters (.237 avg. in 54 games), but Santana's overall OPS, combined at the two levels, was 234 points lower than it was the previous year in the lower GCL.

Santana is one of many young hitters who needs to develop pitch recognition. His high strike out totals are evidence that he is guessing what is coming out of the pitcher's hand far too often. If he continues hitting fastballs well and learns to react to the off-speed pitches, letting the bad ones go, opposing pitchers will be in deep trouble.

Regarded as an outfielder with solid range, Santana's speed on the bases hasn't been anything to boast about quite yet in his young career. In two seasons in the minors, Santana has stolen 12 bases and has been caught 11 times. Although, as he matures, Santana could surely develop as more of a thief on the bases. The athleticism and quickness is there for Santana to add base running to his arsenal of dangerous weapons, it will be a matter of developing his instincts.

One game against the Yankees affiliate Charleston, in May, stands out as evidence of Santana's underdeveloped aptitude. In the 8th inning of a close match up in which the BlueClaws trailed 2-0 at home, Domingo led off with a double and moved to third when catcher Torre Langley singled. Jonathan Villar followed with a dribbler back to pitcher Ronny Marte, who fired to the shortstop at second base, ahead of Langley. The relay throw to first base was in time to erase Villar for the second out, but Santana, who was never looked back to third by Marte, had frozen and broke late toward home plate, and was gunned down to complete a stunning 1-6-3-2 triple play, with the top of the order due up. The score stayed the same and Lakewood dropped the matinee pitchers' duel.

Coaches don't feel that Santana's occasional lapses in judgement or questionable stolen base percentage are defining. The fundamentals can be taught and often, at the lower levels of the minors, first base coaches are reserve players, not actual coaches trying to help the runners steal bags. However, as players move up, they will have access to members of the staff who actively aid in scouting a pitcher or catcher in order to take advantage on the bases.

According to 2010 Lakewood manager Mark Parent, "When (Santana) matures and decides to put in the work and learns to compete everyday in my opinion he could become one of the really good prospects in the Phillies organization. It really is up to him how good he will become."

In a nutshell, Santana is a "toolsy" outfielder that has physical strength which already stands out and has the potential to make a big impact at higher levels. If he continues to progress as a hitter and develops on the bases, the Majors should easily be in his future.

Expect Santana to return to Lakewood in 2011, as the BlueClaws will try to lock down a three-peat of South Atlantic League titles under new manager Chris Truby, who managed Santana with Williamsport last year.

Do you want to buy Diablo 3 online? Diablo 3 is an upcoming video game that is going to be launched this year!