Aumont Headed Back to Bullpen 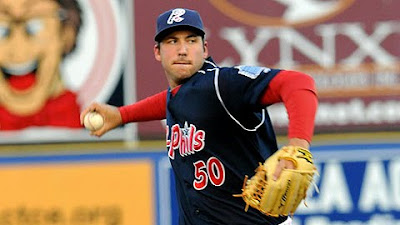 Phillies prospect Phillippe Aumont will return to a relief role going forward. As reported by the Inquirer's Matt Gelb on Thursday, the Phillies plan to restore the righty Aumont to the role in which he enjoyed the most success in his career.

A first round pick in the 2007 draft, Aumont was a prized prospect acquired in the deal that sent Cliff Lee to the Seattle Mariners last off-season. Aumont posted a 2-6 record with 16 saves, a 3.88 ERA and 59 strike outs in 51 relief innings at two levels of the Mariners system in 2009. However, after coming over to the Phillies, the organization chose to move Aumont, who stands 6'7", into a starting role, and he was not nearly as effective. As a member of the Double A Reading Phillies staff, Aumont struggled, going 1-6 with a 7.43 ERA in 11 starts. By June, the Phillies demoted Aumont to High A Clearwater, where he initially pitched in relief and improved somewhat, posting a 2-5 record with a 4.48 ERA in 16 games (10 starts).

Phillies GM Ruben Amaro Jr., speaking about Aumont's downturn in an exclusive interview, stated, "He was very young, coming into a new organization. Aumont...going back to starting again and getting a feel to being a starting pitcher again, he had some of his struggles, but we still view (him) as a high level prospect.

"Aumont obviously didn't have a good start to the season and we pushed him back to Clearwater and he had some great games, but was not very consistent. His consistency and his delivery are still things he needs to iron out."

Aumont was 21 years old for the entire 2010 season and it is apparent that starting him as high as Double A was a mistake from the start.

The piece from Gelb includes quotes from Phillies assistant general manager in charge of player development Chuck LaMar who pins blame, for Aumont's decline, on the organization.

That's where he's comfortable. We wanted to start him last year and we did. His results weren't very good. But we put him in that position. I felt bad sometimes for the kid. He wants to relieve. He feels comfortable relieving. That's what he did in Seattle.

Aumont will report to minor league camp this spring instead of starting off in Major League camp, like he did last year. Returning to the capacity in which he is most comfortable, while being able to get in a routine and building off of it should benefit Aumont greatly.