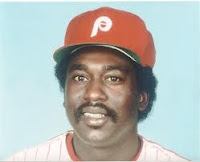 By the time current Phillies television analyst Gary Matthews Sr. joined Philadelphia as a player, he was already a veteran of eight full Major League seasons. An outfielder, Matthews was named as the National League Rookie of the Year in 1973 as a member of the San Francisco Giants.

Matthews debuted in the Majors at age 21 in 1972. Having only played 20 games, as a late season call up, he was still considered a rookie the following season. In 1973, Matthews posted double digits in stolen bases, doubles, triple and homeruns while batting .300 en route to being named the senior circuit's top freshman.

During his years in San Francisco, Matthews, a first round draft pick by the Giants in 1968, continued to be a steady contributor. Following the 1976 season, the Giants and Matthews could not agree on terms for a new deal and Matthews was granted free agency.

Matthews would sign with Atlanta where he became an All-star. His best season as a Brave came in 1979, when Matthews posted a .304 batting average while smacking 27 homers and driving in 90 runs.

In 1981, Matthews was traded to the reigning World Champion Phillies late in spring training for pitcher Bob Walk, who, as a rookie, started game 1 of the World Series in 1980 for Philadelphia. With the Phillies, Matthews filled the void in left field vacated by Greg Luzinski, who departed after 11 seasons with Philadelphia. In his first year as a Phillie, Matthews batted .301 in 102 games of a strike shortened season. He wrapped up his first season with the Phillies on a tear, earning NL Player of the Month honors with a .330 average, 7 HR and 31 RBI in September.

In 1982, Matthews led the league in games, playing in all 162 contests, and batted .281 with 19 homeruns, 83 RBI and 21 steals. In 1983, Matthews' stats declined a bit (.258 avg., 10 HR, 50 RBI & 13 SB), after splitting playing time with Greg Gross in left field. However, the Phillies returned to the postseason for the sixth time in eight years and Matthews would shine, winning the NLCS Most Valuable Player Award after leading the Phils past the Dodgers. In the four game series, Matthews went 6-for-14 (.429 avg.) with 3 homeruns and 8 RBI. The Phillies would go on to lose in the World Series to Baltimore, however.

The following spring, just prior to coming north, the Phillies sent Matthews, along with Bob Dernier, to the Cubs for relief pitcher Bill Campbell and utility man Mike Diaz, who never played a game for the Phillies.

With Chicago, the 33-year-old Matthews helped solidify the team's offense, and assisted with the team's run to win 96 games and dethrone the Phillies as NL East division winners. That regular season, Matthews led the NL in walks (103) and subsequently on-base percentage (.410). He also finished fifth in league MVP voting in 1984. Matthews played 3 1/2 seasons with the Cubs before a trade sent him to Seattle.

After playing 45 games with the Mariners and wrapping up the 1987 season, Matthews retired from playing. A 16-year MLB veteran, Matthews would go on to coach within the Cubs, Blue Jays and Brewers organizations before stepping into the broadcast booth, where he now calls games as a color analyst. Matthews' son Gary Matthews Jr. has played at the Major League level for 12 seasons with the Cubs, Mets, Rangers and other clubs.