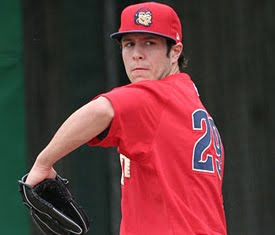 Oregon State product Mike Stutes is a righty hurler that has been impressive throughout his minor league career with the Phillies. Stutes, who stands 6'1" and weighs 185 pounds, was in Philadelphia for two days this week, as the Phillies hosted several prospects for team seminars at Citizens Bank Park.

Formerly a starter, Stutes moved to the bullpen in 2010. Stutes earned a promotion in June after posting a 3-0 record and a 3.79 ERA in 25 games as a member of the Double A Reading Phillies. After moving to Triple A Lehigh Valley, Stutes stayed sharp, going 4-1 with a 3.10 ERA, while holding opponents to a .200 batting average in 28 outings for the IronPigs.

Prior to 2010, Stutes looked solid as a starter. In 2009, Stutes became one of two pitchers, along with Vance Worley, to accomplish the rare feat of beginning the season with Double A Reading the year after he was drafted. They were the first Phillies hurlers to do that since Randy Wolf in 1998.

Last year, the Phillies were open about their preference for Stutes as a pitcher. Based on his body type and pitch repertoire, coaches and higher-ups saw Stutes' future as a reliever. With a fastball that touches 95mph and a strong curveball, Stutes possesses strength and a resilient arm. All of that translated well into being a reliever that could regularly throw on consecutive days.

Stutes, now 24 years old, is not known as a dominant strike out pitcher, but he did punch out 79 batters in 76 1/3 innings at two levels last season, which is impressive.

In spring training last year, Stutes recorded a save while allowing 1 earned run in 2 innings with 3 strike outs and 1 walk, as a member of the big league Phils. This year he is expected to get another shot to show off his talents with the big club in Grapefruit League action.

As a member of the OSU Beavers, Stutes won the College World Series in 2006 and 2007 then was selected in the 11th round of the 2008 amateur draft by the Phillies, who went on the win the MLB World Series, making Stutes, who is used to pitching is huge games on a big stage, an apparent lucky charm.

Stutes is one home grown prospect that the Phillies expect big things from, going forward. With only one relief pitcher (Jose Contreras) under contract after this upcoming season, the Phillies will need pitchers like Stutes to take strides and show they can contribute at the Major League level. If space on the roster opens up due to injury or trade, or if Stutes has an excellent spring, he could see action while rocking Phillies red pinstripes in 2011.