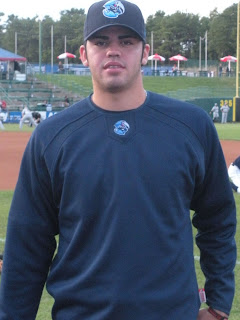 Righty hurler Julio Rodriguez shot up the Phillies' prospect rankings over the past year. Drafted in the 8th round of the 2008 amateur draft as a 17-year-old out of Puerto Rico, Rodriguez has developed both physically and as a player during his time in the Phillies' system.

After an unsuccessful professional debut in 2008 with the Gulf Coast League Phillies (12.19 ERA in 7 games), Rodriguez returned to the GCL in 2009 and showed improvement along with some added muscle. In 11 games (8 starts) that season, Rodriguez posted a 1-2 record with a 3.08 ERA and a .197 batting average against.

As a 19-year-old, Rodriguez began the 2010 season in extended spring training, before making his Class A debut with Lakewood in late May, when he made a spot start in place of an injured Jonathan Pettibone. In his first BlueClaws appearance against the Hagerstown Suns, Rodriguez showed glimpses of things to come as he struck out the side in both the 2nd and 3rd innings before being relieved in the 4th. Despite lacking blazing speed on his fastball (J-Rod's fastball regularly peeked in the low 90's during the 2010 regular season), his strike out totals were extremely impressive.

Rodriguez capitalized on keeping opposing batters guessing with his solid off-speed pitches. He racked up 126 K’s in 96 1/3 innings at two levels in 2010. Rodriguez has a strong curveball that dives away from right-handed batters and a solid change up that will improve as his advances through the minors.

The 6'4", 200 pound Rodriguez is versatile, as shown by his ability to perform strong in both relief and starting roles during time with Lakewood and short season Williamsport, where he spent roughly five weeks from mid June into late July, in 2010. Combined at both levels, Rodriguez posted an overall win-loss record of 7-3 with a 1.89 ERA in 20 games (12 starts).

Lakewood's 2010 manager Mark Parent, who will manage Double A Reading in 2011, said of Rodriguez late last season, "He’s done nothing but impress us. In any role...long relief, starting, I’m very impressed with him."

Rodriguez was named the Phillies minor league pitcher of the month in August, when he recorded a 1-1 record with a 1.17 ERA in 6 games (2 starts). That month, he struck out 38 opponents in 23 innings while holding batters to a .160 batting average. Julio also celebrated his 20th birthday in August.

After helping Lakewood win a second consecutive South Atlantic League championship, Rodriguez pitched for his native Puerto Rico in the Pan-American qualifying tournament and continued his excellent year by posting a 3-1 record and a 2.00 ERA in 11 games for the Gigantes of the Puerto Rican Winter League.

From what I've heard, the Phillies prefer Rodriguez as a starting pitcher, which is why he was moved out of the bullpen to join Lakewood's rotation as they pushed toward their postseason.

Due to his age and the quantity of other starting pitchers that are likely to be assigned to High-A Level Clearwater this coming season, Rodriguez could return to Lakewood in 2011, but is certainly considered a rising star within the Phillies organization.

This piece was also featured on PhilliesNation.com.