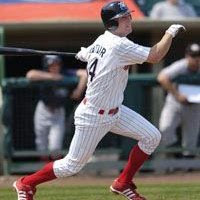 This week, Phillies minor league third baseman and Lakewood BlueClaws fan favorite Travis "Moose" Mattair will be checking in to log diaries from the road, as he starts his cross country journey back to baseball, after taking a year off to dabble in Division I college basketball.

Moose's trip began with terrible news, but with the blessing of his family to not delay his expedition, he trucked on. In this entry, Moose talks about his family, traveling from Washington state, rooming in Florida with an old BlueClaws teammate and the NFL Playoffs. Check back for more from Moose in the coming days.


18 hours on the road yesterday. We began at 4:15 yesterday morning and it started off as a really rough morning for us. I am with my cousin, Eric, and we found out our uncle actually passed away yesterday morning. He's been dealing with and fighting cancer everywhere in his body. We found out last January that he had it. It's just very unfortunate that he ended up passing away, yesterday. It's better off now. He was just fightin' and fightin' and fightin' and now he's looking down on us. So, it's a good thing that he's up there and he's our guardian angel on our way. But it was definitely tough, having him pass away and leaving my parents and seeing my mom in tears when I was leaving. It was a tough way to leave.

My cousin Eric is a carpenter, he's just coming along and we were planning to make a trip out of this and going to see Miami. And he's coming along to help be get moved all the way down there. We left around 4:15...but it was nothing that energy drinks can't fix.

We're in Kansas right now. We stopped at Boise on the way and saw my old roommates from when I was there at Boise State and we went into the house. We also went on the football field to see the blue turf and took some pictures there. We had planned to stop in Denver, but we went a little bit further to Limon, Colorado. And plan to stop in Dallas, Texas. We have about another 10 hours till we get to Dallas and we're going to stop there and recharge and see what Texas is all about. Then we're going to spend the day there Sunday and check out the Seahawks game at a bar or something. After that, we're going to finish up with 19 hours to Clearwater from there.

We are going and going, with minimal stops, till our teeth our floating to even go to the bathroom. We're trying to get to each destination as fast as we can. Each of us are driving 350-400 miles each, and then we switch. We're trying to get down to Clearwater as fast as we can so I can get my stuff moved in to Anthony Gose's place, where Travis d'Arnaud will be staying as well, and then I'm going to show Eric around Clearwater and then we'll hit Miami. Eric's never been to Florida, so it should be a good time seeing everything down there.

As far as the Seahawks, it was the Wednesday before the last game and I went to lunch with my cousin Hailey and she said, "I want to go to the game." And I told her, "No way I'm going," because I had plans. Well then a half hour later I was buying tickets for the Seahawks/Saints game, so me, Hailey, my brother and my friend Meghan, we all went to the Saints game and it was so much fun. When Marshawn Lynch scored that touchdown that put them ahead, it was unreal! It was a heck of a weekend to turn into a huge Seahawks fan. I've always followed them, but never been a BIG fan. But it's times like this that can draw you in more. I think they have a shot to advance. If Hasselbeck shows up, it'll be awesome. I'm feeling good about it. Anything can happen when you make the playoffs. Next week, a .500 team could be hosting a playoff game against Green Bay.

Do you want to watch the green hornet online? It is not released yet but you can watch it online already!