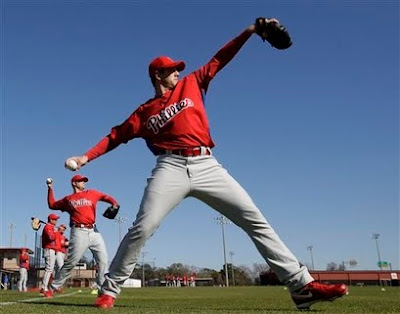 Scott Mathieson has been a name that has intrigued Phillies fans for several years. A 17th round draft pick in the 2002 amateur draft, out of Vancouver, BC, the right-handed Mathieson rose through the Phillies minor league ranks as a starting pitcher and made his Major League debut with Philadelphia in June, 2006.

The 6-feet-3, 200-pounder stepped up another level but didn't have the same results, allowing opponents to hit .312 and going 1-4 with a 7.47 ERA in 9 games, 8 of which were starts, with Philadelphia. By September that season, however, he was sidelined with a torn elbow ligament and required Tommy John surgery.

With some bad luck, Mathieson, who represented the Phillies in the MLB Futures Game in 2005, became a rare case in the currently rather common world of big time elbow surgery, when he required an ulnar nerve transposition procedure following 7 rehab outings in August of 2007. By the start of the following season, Mathieson needed to go under the knife for a third time, with a second Tommy John surgery. All together, his rehabilitation process was considerably long, due to his recurring arm trouble.

On the comeback trail, Mathieson pitched at three levels of the Phillies' system in 2009 and dominated. Combined between time spent with the Rookie level Gulf Coast League Phillies, High A level Clearwater and Double A Reading, Mathieson posted a 4-0 record with an ERA of 0.84 and struck out 34 batters while allowing only one HR in 32 innings pitched. Mathieson followed up his exceptional 2009 regular season with a solid collection of outings in the Arizona Fall League.

As he continued climbing back toward the Majors, exclusively as a reliever, Mathieson's fastball range was clocked in the high 90's, which is well up from the 92-93 MPH that he used to average when he initially broke into big leagues.

In 2010, Mathieson, whose pitching repertoire also includes a good slider and a change up that Ryan Madson helped him improve last spring, shined for the Phils' Triple A affiliate, the Lehigh Valley IronPigs. In 55 games there, he posted a 3-6 record with a 2.80 ERA and 26 saves in 54 games while holding opponents to a .212 batting average.

With the exceptional efforts in the minors and improved velocity, the Phillies recalled Mathieson to the big club in June last season. In a mop-up assignment during an interleague game against Minnesota, Mathieson had a rough outing that got him designated for assignment shortly after. However, the former ace for the Team Canada World Baseball Classic team remained a Phillie and returned to the active roster as a September call up. Mathieson had one more MLB outing in 2010, a 1 2/3 inning appearance against the Brewers in which he allowed an unearned run.
Despite the ups and downs that Mathieson has dealt with, he remains a hurler that could contribute for the Phillies, in a relief role, in the near future.
_____________________________________________________
You can follow PhoulBallz.com on Twitter by clicking HERE.