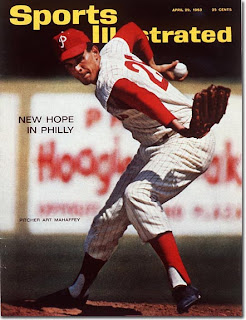 Art Mahaffey was a pitcher with the Philadelphia Phillies from 1960-1965. Signed by the Phils as an amateur free agent in 1956, he made his Major League debut at the age of 22, after four seasons in the minors.

Upon his arrival in the Majors, midway through the 1960 season, Mahaffey, a 6-feet-1-inch right-hander, swiftly made quite an impact with the Phillies. In his first MLB game, on July 30th, 1960, Mahaffey was used in relief against the Cardinals. He pitched a 1-2-3 8th inning and then allowed two runners (Bill White and Curt Flood, who each reached on singles) in the final frame, both of which he picked off. Mahaffey pitched again the next day and picked off Jim Marshall of the Giants, successfully erasing the first three men that scored base hits against him in the Majors.

In 14 games (12 starts) that season, Mahaffey posted a 7-3 record, including 5 complete games and a shutout, with a 2.31 ERA. Mahaffey finished third in National League Rookie of the Year voting, behind the Dodgers' Frank Howard and Phils teammate Pancho Herrera.

In 1961, after losing his first start 2-0, despite allowing just three hits, Mahaffey bounced back in overpowering fashion. On April 23rd, in a home game against the Cubs, Mahaffey set the Phillies record by striking out 17 batters en route to a 6-0 victory over Chicago. Unfortunately for the Phillies, it was one of very few highlights that year, as the disappointing franchise lost 107 games.

Born and raised in Cincinnati, Mahaffey pitched better than his 11-19 record would indicate, that season. He made the NL All-star team, even though he led the league in losses. Mahaffey stayed hot late into that season, tossing a one-hitter against the Cubs in August. Mahaffey followed that up with a 3-0 shutout of the Braves in his very next outing.

The 1962 season would bring another All-star nod for Mahaffey. In 41 appearances that year, 39 of which were starts, Mahaffey posted a 19-14 record with a 3.94 ERA and threw a career high 274 innings. His 20 complete games were second most in the Majors, behind Warren Spahn's 22. On August 2nd that year, in a game against the Mets at the Polo Grounds, Mahaffey accomplished a rare feat. En route to a 9-4 complete game victory, Mahaffey struck out 12 batters and laced a grand slam in the third inning. No Major League pitcher since has struck out that many in the same game he notched a homer with the bases loaded.

Mahaffey had a rough season in 1963, as the high work load seemed to take its toll on the righty hurler. Mahaffey only won 7 of his 26 games, while earning a solid 3.99 ERA. Mahaffey would have a winning record once again in 1964, when he went 12-9 with an ERA of 4.52.
Mahaffey was with the club during the famed 1964 Phillies collapse, in which they had a 6 1/2 game lead in the pennant race with 12 games left and lost 10 straight match ups to finish in second place. Mahaffey started two games during the losing streak.

By the following season, Mahaffey's ERA became bloated (6.21) and his win total was emaciated (2), as he pitched mostly in relief.

Following the 1965 season, Mahaffey was traded to the Cardinals along with Pat Corrales and Alex Johnson for shortstop Dick Groat, catcher Bob Uecker and first baseman Bill White, who was, of course, the same Bill White that Mahaffey picked off in his Major League debut.

Mahaffey would throw 35 innings for the Cards, before being traded to the Mets, but he never played for New York.

Jay Floyd said…
Mahaffey was definitely one of the more interesting guys I've done a History Lesson on in a while.
January 10, 2011 at 2:02 AM