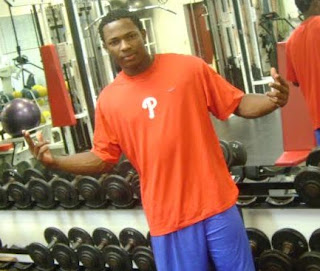 Leandro Castro was a key offensive cog for the South Atlantic League champion Lakewood BlueClaws during the 2010 season. A solid young talent, who played well throughout the entire season and led the 'Claws with 81 RBI, Castro, an outfielder, impressed fans, media and scouts alike.

A right-handed hitter, standing 5'11" with a 180 pound build, Castro will be 21-years-old until mid-June. Castro is an individual that plays ball the right way both on offense and defense, who rarely gives away at bats and seldom makes a mistake on the bases or on defense.

Castro, a native of the Dominican Republic, was signed by the Phillies as a 17-year-old free agent in 2007. He batted .257 in his longest season as a pro in 2010. Castro had previously never played more than 88 games in a single season and fatigue seemed to be a small factor, as his batting average dropped toward the end of the season (.219 avg. after July, .270 avg. until that point).

With plus speed, Castro could surely improve as a base stealer and should start with picking his spots a bit better. His success rate of 62.8% (22 steals in 35 attempts) in 2010 was certainly not ideal. As he moves up the ranks and has more coaches at his disposal, Castro should learn to read pitchers better as well. Keep in mind, at A Level ball, the first base coach is often a bench player there to fill the void, not necessarily there to assist the runners.

A bit of a free swinger, Castro struck out 92 times in 502 plate appearances in 2010, which is 16.5% of the time. His pitch recognition and contact ability saw improvement last season, as his strike out frequency in 2009, in time split between Williamsport and Lakewood, was 18.2 % of his plate appearances.

Castro's bat has some power potential. With 27 doubles, 9 triples and 10 HR in 124 regular season games as a member of the BlueClaws in 2010, his slugging percentage (.406) was the lowest in any of his professional seasons thus far. But as his ability to recognize pitches continues to develop and his strength increases, the capacity to drive balls should come along also.

Known to be a well-liked guy within the clubhouse, Castro, who spent much of his 2010 season playing leftfield for the 'Claws, is an apparent leader for other Spanish speaking teammates. Add to that his tendencies to display flash and flair, and Castro could very well be one of the more fun Phillies prospects to watch as he attempts to ascend toward the big leagues.