Now that the first 75, or so, days since the Phillies' 2010 journey ended have flown by and as we begin the painfully slow crawl of the 40-something days until spring training, PhilliesNation.com will deliver its 2011 top 25 Phillies prospects list, in count down fashion.

Gradually, over the coming week that lead to the dawn of a fresh campaign, with hopes higher than Lawrence Taylor while surfing online personal ads, we will be unveiling prospect rankings with reviews of all the players that our readers should be familiar with.

These rankings will not include Domonic Brown, Vance Worley or Antonio Bastardo, as each of those players spent considerable amounts of time with the Major League club last year. Those individuals all project to make the big league roster in the coming season as well.

Galvis, a superior defensive shortstop once regarded as a prospect with the tools necessary to develop into a big leaguer, seems to have stalled on the offensive front. He posted a paltry .233 batting average and a dismal .586 OPS in 138 games at Double A Reading in 2010. In 21 games with the Navegantes in the Venezuelan Winter League, Galvis, who was signed out of Venezuela as a free agent in 2006, posted a .188 average with just one extra base hit, a triple. Galvis no longer seems worthy of high prospect praise despite his top tier glove and excellent range. 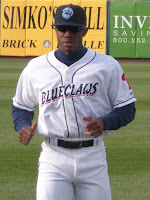 Hewitt struggled quite a bit at the plate in 2010 while with Class A Lakewood. Hewitt switched to the outfield this year, after beginning his professional career as an infielder. In 116 games with Lakewood, Hewitt posted the following splits- .202/.243/.327. Those are certainly not numbers expected from a former first round draft pick at the age of 21, playing in a league where much of the talent was younger than he was. The Phillies have plenty invested in Hewitt, who signed for around $1.4 million, so he will get every chance to succeed.

Savery, a 2007 first round draft selection out of Rice, is likely to make a transition to being an everyday player after spending time as a designated hitter late in the 2010 season. Savery, a lefty who was named a Double Eastern League All-star in 2009, posted a 28-31 record with a 4.29 ERA in four seasons as a starting pitcher in the Phillies' organization. As a hitter in 2010, Savery batted .348 with 3 doubles, 1 HR and 6 RBI in 23 games.

Collier, a compensatory first round pick in 2008, experienced a wrist injury that cost him his entire 2010 season. With Lakewood in 2009, Collier, listed at 6'2", 185 pounds, struggled (.218/.275/.319) and was demoted to Williamsport for a stretch of the season. The lefty hitting Collier, who turned 20 in September, will likely return to Lakewood for the 2011 season where he hopes to prove that he is ready to progress.

Shreve, a right-hander, is a solid prospect who has the potential to soar upward in the Phillies prospect rankings in the 2011 season. Shreve, who turns 23-years-old this week, was a sixth round draft pick in 2008, but suffered an elbow injury during his college season that required Tommy John surgery. The Phillies thought so highly of Shreve, that they still drafted him quite high, despite the injury status. While recovering, Shreve missed the entire 2009 season and made his professional debut as a member of the Lakewood BlueClaws in 2010, going 7-5 with a 3.95 ERA. Shreve, whose repertoire is fastball, change up, curveball, is expected to pitch at High-A Clearwater in 2011.

Escalona, formerly a situational left-hander out of the big league Phillies' bullpen has fallen off as a well-regarded prospect for the organization. As a member of the Double A Reading Phillies in 2010, Escalona had a 4-8 record, with 10 saves, and a 3.81 ERA. Those are surely respectable numbers, but in a season during which he turned 26-years-old, the club wished to see more strength in key relief situations from Escalona, who blew several saves with Reading.

Pettis shined as a late round steal in the 2010 amateur draft. The 6'2", 200 pound right-hander was taken in the 35th round out of UC Irvine and performed extremely well with the short season Williamsport Crosscutters before joining Lakewood for the postseason. In regular season action, Pettis posted an 8-0 record and a 1.37 ERA while striking out 67 batters in 59 innings as both a starter and reliever. Pettis' arsenal includes a 2-seam fastball, a change up and a slider that he feels is his best asset. Look for Pettis to lead the BlueClaws' charge for a third straight SAL championship in 2011.

Lefty hurler Nick Hernandez was a guy who was among my top prospects during the 2010 season, but he has fallen out of consideration at this time...not for any doing of his own, but simply because others have shined brighter in the time that has since passed. Hernandez suffered an injury to his throwing shoulder during the 2010 season, after being named to the mid-season South Atlantic League All-star team as a member of the Lakewood BlueClaws. In 8 starts prior to the injury, Hernandez, whose uncle Angel is a MLB umpire, went 3-1 with a 1.61 ERA and a .192 batting average against. Hernandez experienced setbacks while rehabbing with the Rookie level Gulf Coast League Phillies, and his season was cut short to allow proper healing. With a jam packed list of potential starting pitchers ready to go at High-A level Clearwater next season, Hernandez, who spent a month at instructional ball following the 2010 postseason, could be back with Lakewood to begin the season.

The fact that much of Zeid's success occurred at the Class A Level at the age of 23 kept him from making the list. As a member of the South Atlantic League champion Lakewood BlueClaws in 2010, Zeid earned Phillies minor league pitcher of the month honors in April when, as the team's closer, he posted a 2-0 record with 2 saves while allowing no earned runs in 9 outings. He was also honored as a mid-season SAL All-star in 2010. The Phillies' developmental staff likes Zeid, who combined to start 16 games in 2010 between Lakewood and the Arizona Fall League, better as a reliever than a starter. Zeid struggled with his slider at times during the 2010 campaign, but he worked hard to improve his results, using it as a key weapon to put his mark on Lakewood's title run. His repertoire also includes a fastball and a split-change hybrid known as a fosh. Zeid, a 10th round draft choice in 2009, could skip over High-A Level Clearwater completely and join the Double A Reading staff out of spring training.

In the coming weeks, check back with PhilliesNation.com regularly as we unveil our list of top 25 ranked prospects within the Philadelphia organization, one by one. The future is certainly bright.