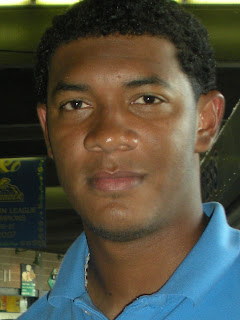 Righty hurler JC Ramirez was one of three prospects acquired from Seattle last off-season in the trade for Cliff Lee. While some critics suggest that the trio of farm hands did not necessarily impress (Ramirez posted a 5.45 ERA at Double A, Phillippe Aumont struggled greatly at Double A when he was converted to a starting pitcher and Tyson Gillies was sidelined with a leg injury much of the season), Ramirez showed flashes of exceptional talent and displayed reason to believe he can mature into the talent that the Phillies were hopeful for when they acquired him.

One example of what Ramirez can do was an extremely impressive complete game loss, on the road, to the eventual Eastern Division champion Trenton Thunder in which he struck out 9 and walked none while allowing just 3 earned runs that were scored on two defensive miscues by his teammates.

With a two-seam fastball that regularly reaches the mid-90's, a slider with excellent control, and a respectable change up that he uses to keep batters honest, Ramirez has tools that continue to impress. The Phillies encouraged Ramirez to throw his change up more frequently in order to put together a big league repertoire, so he spent much of the season focused on improving that pitch.

The 6'3", 225 pound Ramirez, who was a catcher before he became a pitcher in his youth, joined the Phillies organization with a career ERA of 4.78 in 82 games as a pro.

Ramirez, the product of a Cuban father and a Nicaraguan mother, had surgery just after the 2010 season ended, to repair torn cartilage in his hip. His recovery is reportedly moving along and Ramirez is expected to be active once minor leaguers report to spring training.

In a July interview, Ramirez told me, with a laugh, that when the 2010 season began he wanted to show the people of Philadelphia that their team acquired the guy that could replace Cliff Lee. However, now that Cliff Lee has returned to the Phillies organization, after signing as a free agent this off-season, Ramirez's future won't involve replacing Lee, but instead he will find an even more difficult task ahead...trying to break into the same pitching staff as Lee.

Anonymous said…
Hello : )
Buying things on-line or in-store? which usually would you like? really wondering lol.. i prefer in-store only because i don't really like expecting it to come!
Cheers
Olivia
February 2, 2011 at 8:42 AM