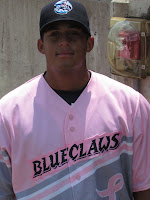 Lefty pitching prospect Mario Hollands took great strides in 2011 with the Class A Lakewood BlueClaws. After beginning the year as the club's opening day starting pitcher, Hollands, a 10th round draft choice by the Phillies in 2010, went through some difficult times and was moved to the bullpen, where he flourished.

Hollands, 23, took some time this week to chat about spring training, the stress of the steady wave of player cuts in camp and more. Read on for my check in with Mario.


How would you assess spring training to date? What have you taken from these past few weeks?
I'm really happy it's almost over. It's a long road for everyone. But besides that, with all the changes in personnel, I'm happy to come out with a job.

And I've been able to work on different pitches and just being able to improve them. Fine tuning some pitches before the season starts....just the little things that I'm able to work on each day has really helped out.

You mentioned being happy to still have your job. With guys who seemed to have a firm lock on their spot, like Eric Pettis, getting cut, it really seems like almost anyone could go at any time. I spoke with Brian Gump, a player that was released last week by the Phillies, and he described entering the facilities each day as "a walk of death", as guys are unsure if they'll be requested to go talk with the brass and receive bad news. How stressful is it for players to walk into that on a daily basis?
That "walk of death", as Gump called it, is easily the scariest thing I've ever faced, or anything I've come across. It's so intimidating and the walk is so far and you can see (the coaches) ahead of you and for 45 second (as you walk), you don't know if they're going to ask you to come off to the side or if you're going to get to just keep walking by them. It's absolutely terrifying. I'd have to say that applies for everyone. From first rounders to recently drafted kids, it's the worst thing. It just makes for a horrible morning. It actually just turns into horrible days because (when guys are cut), you have to say your goodbyes to all these guys that you might not see again maybe, ever, or for a long time. It's just a horrible time of the year and I think...there's still one more cut and everyone's just dreading that morning.


What are your expectations for yourself early this season and then later in the year?
Early on I just really want to establish myself in the bullpen. Of course, I just want to get off to a really good start and hopefully that just translates to more success throughout the season.

Everyone really wants to end (the season) at a level higher than where they started (the season). I think that's everyone's main goal, but I just want to continue to pitch well and get better as a reliever because I haven't been doing it that long.

In relation to that, I know last year you began the season as Lakewood's opening day starting pitcher and you moved to the bullpen just before mid-season. How would you describe your transition over the last 12 months?
I think relieving and starting are just really different and actually, well, I've had time to focus on relieving, but prior to that I had always been a starter. It's just a much easier transition, coming from college- starting in Williamsport, starting in Lakewood, including opening day, it's been a different transition for me. You don't have to worry as much. There's a lot of- I can't say stress- but you don't have that same pressure.