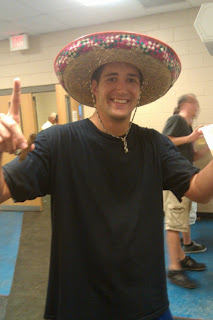 Earlier this week, I ran a feature on lefty hurler Nick Hernandez, who is recovering from surgery on his throwing shoulder. Hernandez, an All-Star with Class A Lakewood in 2010, has been relatively out of action since May of that season with repeated shoulder issues. Aside from his four rehab outings with the GCL Phillies in 2010, in which he struggled, Hernandez has posted tremendous professional numbers with an 11-2 record and a 2.25 ERA in 23 starts.

I spoke with Nick, a 12th round draft choice of Philadelphia in 2009, about several subjects related to his down time and recovery. Here are some questions and answers that didn’t appear in the previous story about this promising young pitcher.


Where would you rate your health right now and what are you working on until you can throw from a mound?

Health wise, I feel I'm about 80-85 percent right now. I still have some arm strength and stamina to build up in my shoulder but that will come within the next month or so.


Since you’re not game-ready yet, what is your routine typically like right now?

I come to the field, do my shoulder exercises and then go out and throw with the guys when they go out. After throwing, I usually have some manual therapy on my shoulder/scapula area and then do some kind of a workout, whether it be upper body or lower body.


Rehab can be very routine with excersises and rest. Was there anything unique about the rehab process for you after the surgery?

I wouldn't say there was anything unique about it. The only thing I could compare it to is a roller coaster ride. It is the toughest thing I've ever done in life both mentally and physically. Everyday working on something that is your career is a grind and during rehab you have way too much time to think about things, but finding new hobbies was a way for me to kind of escape from it.


Is there anybody within the organization that was extra supportive or that served as a motivator during your down time?

Definitely. Some of the guys have definitely been extremely helpful. The training staff has been incredible during the entire process, and then players within the organization have pushed me to find different things to get me better. Two guys especially have really been helpful and that's Mike Nesseth & Jonathan Pettibone. They've pushed me during spring training especially and have always told me that I'll be on a mound again, even when I've had days that I've thought there was no way I'd ever pitch again. And I'm very thankful for them and everyone who has helped me.


It certainly seems like it has been a very long road for you to get this close to full health. Is there anything else you’d like to share about the full process of your injury and the rehab?

I just wanted to also thank Jack Curtis and Dickie Noles, especially during this time. During an injury and rehab process, your mind thinks way too much and they have both helped me out significantly with the mental part of baseball and life in general. Thanks for taking time to ask me some questions and, hopefully, I'll be seeing you and the fans soon.
________________________________________