Gump Speaks on Getting Dumped by Phils 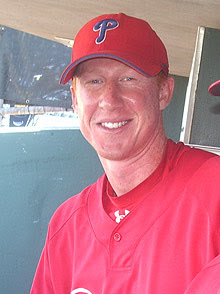 If you missed it on Sunday, I detailed the Phillies' initial wave of minor league player releases. Among the individuals that Philadelphia parted ways with was outfielder Brian Gump, who was a 26th round draft selection in 2009 out of UC Santa Barbara.

I had the opportunity to speak with Brian on Sunday and he agreed to allow a glance inside the process of getting released, his time with the Phillies and other things. Read ahead for that exclusive content.


What is the process of getting released like? How does everything go down?
The process is what the players refer to as "the walk of death". In the early (morning), when we are all arriving at the complex, there is usually a coach or two waiting outside the front office to pluck players away and send them to the office to sign their release papers and talk with the brass. It is an unsettling feeling for almost all the players as you approach the front and have to walk past the coaches to get into the locker room, not knowing if they are going to ask you to come with them.


Is getting released a surprise at all and how is this sinking in?

It was a bit of surprise, but the organization has quite a log jam of older talent across the board in the AA and AAA levels that creates a bit of a glass ceiling for everyone outside of the "top prospect" category, so it wasn't totally out of the blue for me. They had a lot of guys in camp and obviously cannot keep every one.I want to stress how heartfelt they were when they spoke with me and told me how hard of a decision it was for them and how much respect everyone in the organization has for me, that really meant a lot to me that I had made a good impression and that all my hard work had not gone unnoticed. It truly makes it easier to stomach. I also appreciate that they thought enough of me to let go of me early enough to possibly land with another organization if I am so lucky to have that opportunity. They made it clear that they think highly of my skills as a ball player and highly of me as a person and that it was just a bad circumstance of me not getting the opportunities on the field I needed to continue to develop because of all the prospects we have at my position.I think there are many guys who get released and are crushed because they know its not only over, but they know they could have worked harder. I am proud to be able to walk away from the Phillies with my head held high, knowing that I worked as hard as any body and prepared myself as well as I could. I showed up a better player each year, it was just unfortunate circumstances of a numbers game and the business of baseball that caused it to not work out.


Clearly your time with the Phillies will always be memorable for you. Can you just share some thoughts on that and perhaps which team personnel helped you the most during your tenure in the Philadelphia organization?

My time with the Phillies was awesome. It truly is a class organization that not only cares deeply about its players, but about its fans too. We are a family and from top to bottom there is a family atmosphere. I wish them nothing but the best and am holding out hope that one day I will return to the organization either on the field or in the front office. As for coaches and personnel who helped me out, it's not really fair to pick or choose one or two. There are honestly too many good coaches and instructors that took their time out to instruct me, answer questions and offer advice to single any out. Even the ones I wasn't as close with were still helpful and very open to helping make myself, or any other player that seeks out their knowledge, better.


Already, Gump has begun the process of moving on. With a solid skill set and his mind on any option available, including possibly a switch to pitching, Gump has been in touch with other organizations to see if there might be interest in his services. To follow his journey in baseball as it moves forward, be sure to check out Brian Gump's personal blog by clicking here.