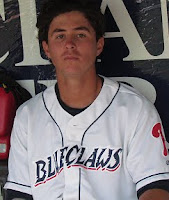 Unda (pictured, right), a 22-year-old infielder had been signed by the Phillies in 2008 and played as high as Class A Lakewood, where he went 0-for-8 in 3 games played last season. The Venezuelan native was a member of the Phils' championship Gulf Coast League team in 2010.

Cusick, a 23-year-old right-hander, was also selected in last year's draft. In 18 combined appearances (1 start) with the GCL team and Williamsport in 2011, the University of Penn product went 3-2 with a 3.79 ERA.

Johnson (pictured), a righty reliever that was selected in the 21st round of the 2009 draft, had a respectable season with Class A Lakewood in 2011 (4-6 record, 4.31 ERA, .268 batting average against). As the closer for short-season Williamsport in 2010, Johnson was a New York-Penn League All-Star. Johnson will turn 24 years old next month.

Gomez, a native of Venezuela, had a very good campaign last year for Williamsport, as the team's closer. In 28 relief appearances, Gomez went 4-1 with 10 saves and a 2.84 ERA. The right-hander was signed by the Phillies back in 2008. Gomes turns 22-years-old in May.

Davis, a Western Kentucky grad, was also signed as a non-drafted free agent last year. In 17 combined relief outings with the GCL team and Lakewood, he posted a 1-1 record with 2 saves and a 2.33 ERA. Davis turned 23 years old over the off-season.

If more news becomes available on players released from Phils' camp, you can read about it right here.

**Update, Monday 3/25-**PhoulBallz.com has also learned that five other players have been released from Phillies' minor league camp. Three pitchers and two others were among the cuts.

Fabian Cota and Rob Cooper, both southpaws, and Jack Van Leur were casualties of the latest round of cuts. In addition infielder Geancarlo Mendez and first baseman Michael Marshall have been let go as well.

Jay Floyd said…
Thanks guys. I caught the Cusick error & fixed it after I posted, but blew the data on Durham.