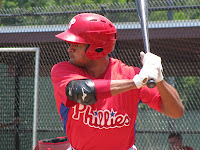 Well-regarded Phillies outfield prospect Tyson Gillies is back at it for his third season in the organization. After being acquired in the December, 2009 trade that sent Cliff Lee to Seattle, Gillies, a 23-year-old British Columbia native, has been plagued with nagging injuries that have held him to just 31 regular season games and a hand full of extended spring training games played.

After an off-season in which he played in 27 Arizona Fall League games and spent countless days at the Phillies' spring training home in Clearwater, FL, Gillies is 100% healthy and is focused on having an impact season in the Philadelphia developmental ranks.

This past week, Gillies went 1-for-2 with 2 runs scored and a stolen base in the Phillies' victory over the Florida State University Seminoles in the spring's exhibition opener. As the spring continues, team brass will be watching the speedy outfielder closely in hopes that he returns to being an elite performer.

Recently, I briefly spoke with Tyson about pressure to perform, learning from established big leaguers, golf and plenty more. Read ahead for that interview.


Tyson, you made a bit of a splash in the Phils' spring training opener against Florida State. How was that?

I had a lot of fun playing in that game. Just to get back out on that field out here in Clearwater. It's always good to be competing, especially side by side with some of the established players.


Who are some of the players that stand out to you as exemplary talents or are there guys in big league camp that you are trying to pick up things from?

It's been great being around some of the established big league guys in camp. Being able to learn from people like (Shane) Victorino, when it comes to his defensive and outfield skills and the errorless baseball that he plays, it's just great to watch these guys and learn a little bit from them. On the bunting side, we have two of the best (drag) bunters in the game in our organization right now, being Juan Pierre and Scott Podsednik. It's just great. There's so much talent here. There are so many things that somebody like me can learn from all these guys, so it's exciting to go in there every day.


Obviously, you've dealt with many health issues during your time with the Philadelphia organization. Do you feel added pressure to perform at a high level when you are healthy?

It was hard to go through all the injuries I had, and everything like that, with the setbacks and everything. Some people might feel pressure, but I just know I have to get out there and just work hard and find myself the way I used to be and how I used to play. And hopefully everything will work out.


Clearly your health is likely something you can't help but focus on. What are your main goals for 2012?

The biggest goal for me is to establish my routine for my body and the biggest goal for me is to stay on the field. I could set a bunch of goals for myself, but the biggest thing is to stay healthy and to go in there and feel comfortable. I've had success in the past when I've just stayed on the field and played,so that's all I have to do is stay in there and keep active and be a student of the game and take it from there.


This week, the Phillies had their annual golf outing where groups of players and coaches got together for the day and compete at a different sport. Are there guys with the Phils that stand out as elite golfers? Also, is there anyone that isn't that good and should just put the golf clubs down?