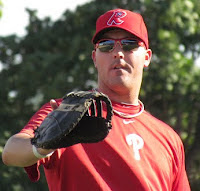 News out of Phillies camp on Friday detailed a not-so-surprising event going down. Matt Rizzotti, who has long been held back in the Philadelphia organization, was dealt to the Minnesota Twins for cash considerations.

The 26-year-old first baseman was steadily blocked at the highest level of the system by former National League Most Valuable Player and All-Star Ryan Howard. Rizzotti, a power hitter with often-critiqued defense, had improved his overall game and strived to improve his conditioning in recent years, only to be removed from the Phillies’ 40-man roster and more-or-less demoted back to Double-A Reading in 2011 after making his Triple-A debut in 2010.

Selected in the 6th round of the 2007 MLB amateur draft, Rizzotti often dominated minor league pitching in his minor league career, slugging 66 homeruns and driving in 231 runs while batting .292 in five pro seasons.

In the Minnesota organization, Rizzotti will have an improved shot at reaching the big leagues, as American League designated hitter rules would allow him another position to potentially occupy. That more favorable circumstances mean an increased chance to impact some of the best online sports books as well.

In the meantime, if Rizzotti is not filling a roster spot with the Twins, it is likely that he'll be competing for their Triple-A club, the Rochester Red Wings, who play in the International League, which is the same league that the Phillies' Triple-A team, the Lehigh Valley IronPigs play in. Rochester visits Lehigh Valley on April 14th and 15th.

To hear an interview I did with Matt last year, in which he answered fan questions, click HERE.