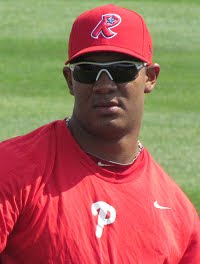 Word out of spring training today (via a Matt Gelb tweet) is that the Phillies have decided to move righty pitching prospect J.C. Ramirez to a relief role. The native of Nicaragua was part of the trio of players that Philadelphia required from Seattle in return for Cliff Lee in December, 2009.

Ranked as the Phillies' number 20 prospect recently by PhilliesNation.com, Ramirez spent last season with the Double-A Reading Phillies, where he got off to a scorching hot start in April, posting a 4-0 record with a 1.03 ERA and a .187 batting average against in 4 starts. As the season moved on, that output fizzled, however. Ramirez finished the reglar season with an 11-13 record, an ERA of 4.50 and .258 batting average against in 26 starts for the R-Phils. After the Eastern League All-Star break, Ramirez was rather awful on the mound, tallying a 5.92 ERA and a .305 BAA in 10 outings.

At this stage, the Phillies feel the 23-year-old Ramirez, who struggled with his command in the latter portion of last season, has a brighter future out of the bullpen, where he will be able to see additional action and work on his pitches more often. The 2012 season will be very telling for Ramirez with his new role. Expect him to get another dose of Double-A experience with Reading this year.