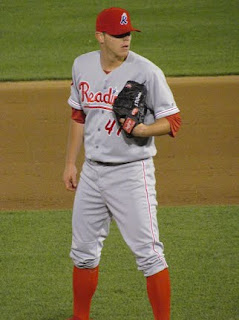 You know him, you adore him and Justin De Fratus is back in the J-Bone Zone. The right-handed reliever joins PhoulBallz.com once again, from Clearwater, FL to offer his thoughts from inside Phillies spring training.

On the progression of his elbow, which kept him out of action with soreness for weeks at the outset of spring training...

Everything's going well. I think the plan is to throw off the mound next week. I think we're shooting for the middle of the week to make that happen. I looked at the schedule the other day and I've forgotten exactly when it is, but I know it was the middle of the week. Everything's going well. Obviously, we're not going to start out with a 40 pitch bullpen, but I am just going to keep taking it slowly and allow my arm to get in shape. We're not rushing anything and we're just going to listen to my arm and that'll be the thing that tells us when I'm ready.


On the level of soreness he experiences after throwing now, compared to at similar stages in other pre-seasons...
I think I'm right where I should be. You know, there may be a little more soreness than there has been in the past, but I am getting older. I know I'm not old, by any means, but your body- there's different ways that your body responds. And I'm very familiar with where I am now and I see no cause for concern. I'm in a good spot right now.


On his lack of pitching in games making him more hungry for competition...


On how he views Twitter (follow Justin on Twitter by clicking here) and if it's a way for some guys to build up their own brand...

For me it's something I use to bond with fans. In itself, it's a way to help build your name or your brand, but that's something that can build on its own too. If I'm just doing it to bond with fans then my brand is going to build itself. I do it to just have. I'm trying to get people to just know who I am, as a person, without it being too close, like we do here. Everybody wants to know what it's like to be a professional athlete and think, "I wonder what that guy's like." So, it's kind of a cool thing for people to get to know me in that way. I just have a good time with it.


On if the injuries to a pair of big Phillies' stars can change the vibe around the clubhouse...

I haven't noticed anything different or any change. To be a professional athlete you have to understand that there's always going to be adversity. So, the guys who can ignore it the best are the ones who succeed. These kinds of things, when they happen- obviously, you'd rather they not happen, but- you know what? The season's still going to start. So, you can either dwell on it or you can get over it and play. And the way our guys are, they're winners. So, what are they going to do? They're going to get over it and play. Chase (Utley) and Ryan Howard- they're going to be ready when they're ready. And when they are, they're going to dominate like they always do. There's no sense of panic in the clubhouse at all. We have plenty of guys to win ball games.


Check back in the coming weeks for more from Justin De Fratus.