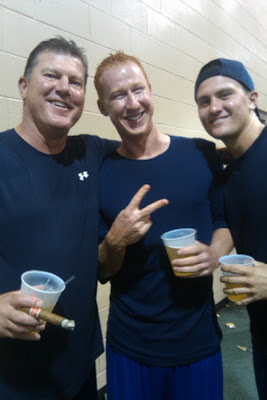 Sunday morning, the Phillies began trimming some players they deemed expendable from minor league camp. Outfielder Brian Gump (pictured, center, celebrating Lakewood's 2010 South Atlantic League championship with coach Greg Legg and Kyle Lafrenz), who posted a .239 average with 9 HR and 52 RBI in his three professional seasons, was among the collection of players that Philadelphia parted ways with.

Gump, a 26th round draft selection in 2009 out of UC Santa Barbara, worked hard this past off-season to increase his strength and stamina. Often used as an extra man, Gump entered spring training this year with a focus on showing the Phillies that he was deserving of a shot as an everyday player.

On his personal blog today, Gump wrote, "Adversity breeds greatness, so I've got to battle on and see where this takes me."

The 24-year-old earned the nickname "The Jewelry Man" as he put together a nice collection of rings by winning three championships (one with the Gulf Coast League team, two with Lakewood) during his tenure with the Phillies.

Philadelphia also released Australian-born infielder Alan Schoenberger, who was signed by the Phillies back in 2006 and posted a combined .190 batting average with Class A Lakewood and Class A Advanced Clearwater last season. Also released by the Phillies were lefty hurler Ryan Feierabend (10-8, 5.39 ERA in 28 games with the Triple-A IronPigs last year), right-handed pitcher Jesus Pirela who pitched with short-season Williamsport last season, and Kasey Kiker, a lefty hurler, who was signed by the organization as a free agent last month.

If more news becomes available about released players, you can read all about it, right here, on PhoulBallz.com.