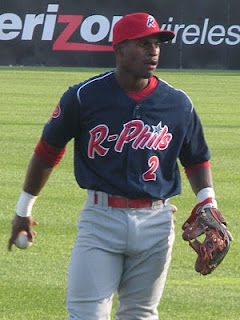 Infield prospect Harold Garcia will miss much of the season for the second consecutive year as the Venezuela native underwent micro fracture surgery on his right knee. The 25-year-old is reportedly expected to miss 4-6 months.

After spending so time this past off-season in the Venezuelan Winter League, Garcia reported to spring training with high hopes for a healthy year, but recurring discomfort resulted in further examination of his knee and it was decided to further repair his troubling joint.

Garcia had surgery to repair a torn ACL in his right knee early in the 2011 season, after he began the year with Double-A Reading. It was a tough break for Garcia, whom the Phillies had grown very high on after a tremendous 2010 campaign.

This marks the third straight year that Garcia will miss considerable time with a significant injury, as he began the 2010 season on the disabled list with a left hamate fracture. However, that ailment didn't stop the 5-foot-11 190-pounder from putting together a Class-A Advanced Florida State League record 37-game hitting streak that season.