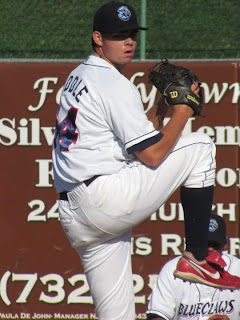 Left-handed starting pitcher Jesse Biddle redefines homegrown talent. Born and bred as a Phillies fan in the Philadelphia region, the youngster’s dreams came true in 2010, when he was selected 27th overall in that year’s amateur draft. Biddle wasted no time signing his first professional contract and quickly made his minor league debut, beginning his ascent toward donning the home uniform of the team he cheered on from the seats of Citizens Bank Park all throughout his teenage years.

The graduate of Germantown Friends School in Philadelphia combined to sport a 4-1 record with a 3.92 ERA and a .241 batting average against in 12 starts with the Gulf Coast League Phillies and the Williamsport Crosscutters in 2010.

In 2011, Biddle became an All-Star in the South Atlantic League with the Class A Lakewood BlueClaws. As the team's most dependable starter through much of the year, Biddle posted a 7-8 record with a 2.98 ERA in 25 games (24 starts) and struck out 124 batters in 133 innings pitched. In addition, he held opponents to a .219 batting average.

Biddle seems to improve down the stretch, as the 6-foot-4-inch 225-pounder rocked a 2.61 ERA in three Class-A short-season starts after his August, 2010 promotion from the GCL. He also wrapped up his 2011 campaign with a stellar stretch in which he tallied a 1.91 ERA over his final 12 outings.

What's even more impressive about how Biddle finished his 2011 season is that he began the year with a 0-4 record and a 5.91 ERA through his opening 5 starts. Adjustments were key for Biddle, who worked closely with pitching coach Steve Schrenk to develop a better approach against SAL hitters.

Confident in his own abilities and control, Biddle maintains a tight focus on the tasks at hand on a frequent basis, even on off days. There is not a day that passes in which Biddle hasn't done homework in some fashion to learn a bit more about the game of baseball. Biddle also has a great frame of mind and realizes that achievements and promotions won't be handed to him and that he has much work ahead at all times.

The 20-year-old left his final 2011 regular season start with a knee ailment that was described as a tightening of the joint. Rest and rehab worked well as Biddle spent time this off-season in the Florida Instructional League and is now raring to go, at full health, for the upcoming campaign.