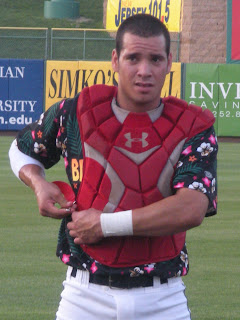 Righty hitting catcher Sebastian Valle has emerged as one of Philadelphia’s top offensive prospects. Using his quick bat and strong catching abilities the 21-year-old has built a reputation as a dangerous hitter and a leader for his pitching staff.

Since signing as a free agent with the Phillies at the age of 16, Valle has improved steadily in every aspect of his game. A smart hitter with power, Valle really shines behind the plate. Pitchers who have thrown to Valle cite his maturity and focus as qualities that help him stand out in leagues where talent is abundant.

In 2008, Valle played for the Gulf Coast League Phillies, where he batted .281, hit 2 homers and drove in 18 runs in 48 games. There, he helped guide the GCL Phils' pitching staff to a league championship.

The following year, Valle, a 6-foot-1-inch 200-pounder, split time between Class A Lakewood and short-season A level Williamsport. In 50 games for the Williamsport Crosscutters, Valle shined, posting a .307 average with 6 homeruns and 40 RBI. In addition, Valle sported an .866 OPS with the ‘Cutters. The production wasn't quite the same as a member the Lakewood BlueClaws that year, however, as Valle struggled for playing time behind eventual Roy Halladay trade chip Travis d'Arnaud. In 45 games for the eventual South Atlantic League champion BlueClaws, Valle batted .223 with 1 HR, 15 RBI and a .644 OPS.

The 2010 season presented a chance to play more with Lakewood and Valle produced very solid numbers, as one of the leaders of the team's offense. Valle began the year a bit slow, notching just a single homerun in his first 40 games. Once he heated up, though, Valle hit 8 homeruns over the next 18 games and kept it going through the remainder of the year. In 117 regular season games, Valle posted a .255 batting average, while slamming a team leading 16 homers and driving in 74 runs to help his club lock down its second consecutive SAL title.

With Class A Advanced Clearwater, in 2011, Valle posted a .284 batting average with 5 homers and 40 RBI. Valle played in just 91 games, as he was held back with some injuries last year. Dealing with a sprained thumb, among other ailments, made it difficult for Valle to swing at his best and drive the ball.

Leading a group of minor league All-Star hurlers know as the Phils’ “Baby Aces”, Valle was honored as an All-Star himself last year with the Class A Advanced Clearwater Threshers. His terrific rapport with his staff and knowledge of each pitcher's strengths enables Valle to guide them toward bigger and better things.

Already a steadily sought after prospect, Valle projects to be a big league catcher and has displayed considerably more power and consistency with the bat than current Phils backstop Carlos Ruiz did at the same levels during his climb up the developmental ladder. In addition, Valle is doing those things at a younger age than Ruiz was in those same leagues.

An aggressive batter, Valle has a low walk rate that is quite noticeable and he must become more selective while batting. Phillies coaches have surely addressed this with the youngster. Surprisingly, Valle has walked twice in three Grapefruit League games with the big league club this spring.

Defensively, Valle has developed greatly and has impressed former big league catchers Mark Parent and Dusty Wathan, who have managed Valle with Lakewood and Clearwater respectively in each of the past two seasons.