Health is the Focus for LHP Prospect Hernandez 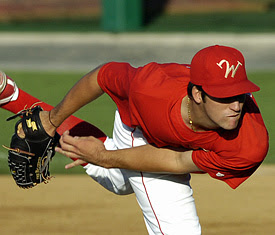 After undergoing shoulder surgery last April, lefty pitcher Nick Hernandez has been striving to get healthy so that he can continue living his dream of playing professional baseball. A 12th round draft selection in 2009 out of the University of Tennessee by the Phillies, Hernandez expects to return to the mound soon after being out of action for a lengthy stretch.

Hernandez, the nephew of Major League umpire Angel Hernandez and the son of former Brewers 1st round draft pick Nick (father is Nicolas, son is Nicholas) Hernandez, became an All-Star in the South Atlantic League with the Class A Lakewood BlueClaws in 2010 by posting a 3-1 record with a 1.61 ERA while striking out 52 and walking just 8 in 56 innings pitched in 2010. Following his tremendous start that year, Hernandez began experiencing discomfort in his throwing shoulder and was shut down for much of the remainder of the season. He rehabbed that year, making four starts with the Gulf Coast League Phillies but experienced a setback and did not return to action until the Florida Instructional League that autumn.

After being diagnosed with another labrum issue last April, rest and rehab were clearly not enough to get Hernandez back to full health, so surgery was required. Hernandez, a Hialeah, FL resident, has been recovering ever since.

With a self-described 80-85% health in his shoulder right now, Hernandez has progressed to a throwing program at 120-feet distance and has not begun pitching from a mound yet. The lengthy rehab process is not discouraging to the 23-year-old, however he is extremely determined to return to game action. Beyond that, Hernandez doesn’t quite have any goals yet.

“It’s been a long road with a couple of setbacks during the process, but I think the last setback was my final hurdle,” Hernandez said. “Right now my only goal is to get completely healthy. I can’t have pitching goals because, right now, pitching in games is still some ways away for me.”

The 6-foot-4-inch, 215-pound Hernandez will begin throwing full bullpen sessions in early April, coinciding with the first week of extended spring training. A return to game action should come in the form of extended spring training outings in Florida, in late April or early May. If everything goes well, Hernandez expects to join a full season roster by the minor league All-Star break in June.

Missing as much time as he has, Hernandez has found it difficult to muster internal drive, at times. Competition is often what pushes a player and once that is taken away, a guy on the sidelines might struggle to progress forward. Hernandez found other motivators to keep things moving both mentally and physically.

“Competition is always something that has driven me to get better and with that being taken away, you have to find other things that motivate you. Like watching guys you’ve played with continue to get better and guys that have been in rehab with you getting out on the field again. You crave for the competition again and when my opportunity comes, to compete again, I have to take complete advantage of it,” Hernandez stated.

A starter for the entirety of his professional career, a change could be in store for the youngster. Regarding what role he will have going forward, Hernandez declared specifics on that were unclear.

“They haven’t really discussed anything about starting or relieving once I am pitching again,” Hernandez said. “To be honest with you, I’m not even thinking about that. I just want to get back on the mound again. It’s been way too long!”

And while it's not yet known exactly which team Hernandez could be assigned to this year, what is certain is that with almost two years of stifled competitive energy pent up, a healthy Nick Hernandez has the potential to be a force once again in the Phillies' developmental ranks in 2012.