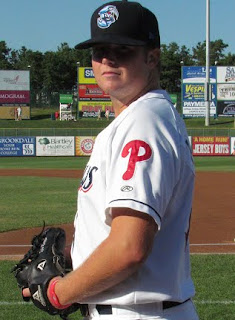 Tyler Knigge, a 12th round draft pick by the Phillies from 2010, has been an impressive relief pitcher during his time with the organization. Sporting a fastball that resides in the mid-90's, a knuckle curve that he learned from his father, a change up and sinker, Knigge feels that he is equipped to take on all comers, as he ascends toward the big leagues. A competitive guy, Knigge challenges opposing batters with his stuff and isn't afraid to take the ball in any situation.

Last year, the 6-foot-4-inch 215-pound right-hander had an impressive campaign with the Class A Lakewood BlueClaws in his first full professional season. In 43 relief outings, Knigge posted a 4-3 record with 4 saves and a 3.32 ERA with a .243 batting average against.

Recently, I spoke with Tyler, 23, from the Phillies' spring home in Clearwater, FL. He talked about a speech by the Phils' GM, arriving spring training considerably early and more. Read ahead for Tyler Knigge's spring training check in.


On the potential to follow his manager from Lakewood last year (and for his 1 game stint with short-season Williamsport in 2010), former Major Leaguer Chris Truby, up one level to Class A Advanced Clearwater this season...
I really hope I get the chance to do that. I love playing for Truby, he's been a great coach. Playing for him has been a great experience for me, especially because he has the big league experience and everything. I'm able to learn a lot from him and my expectation is, obviously, to keep moving up and being able to play under the same manager for two years in a row could be a great advantage for me and it's definitely something I am looking forward to.


On reporting to spring training early and what advantages that could provide for him going forward...
Being from Idaho and being in the cold weather and everything...it's a lot different being able to go down early. My first spring training, I didn't have the opportunity to go down early, but this year I had the opportunity to come down about 18 days early and work out and get into the warm weather and really become acclimated, which really helped me to loosen my arm up and I was able to get into the- we have a new conditioning coach, and I was able to get into the conditioning program and that has really helped me out preparing for the spring training aspect.


On his closely knit family's avid fandom for his pitching career and them paying him visits from their home state of Idaho...
My parents are actually here in Florida right now. They had the opportunity to take a little bit of time off work and witness spring training, which not all players' families get to experience. And even better yet, they get to come down and watch the Phillies, the best team in Major League Baseball. The first plan is for them to visit here for spring training and then, as the season continues on, I'm sure they'll make another visit to come watch me play.


On the most appealing thing about Clearwater...
The weather is definitely one of the better aspects of playing in Florida. It's definitely better to pitch in the heat. Being a pitcher, I would say, especially me, I like being able to feel loose, and get comfortable on the mound. My first year in professional ball, I played with the rookie ball team, here in Clearwater and, so, I'm used to the weather. It's something that I enjoy pitching in.


On whether or not the humidity in Florida has ever been bothersome toward his game, like it can be for other hurlers...
The first year I was here, in the GCL, I did have some trouble finding grip on the ball, but baseball gods were so kind as to bless us with this little invention called rosin. And I had never used it before, being from Idaho, where any heat that you get is dry, and I never had a need for it until I got to Florida. About two appearances into my professional career, I decided, "Well, throwing a 94 mile an hour fastball halfway up the screen behind home plate isn't gonna get me real far." With issues holding onto the ball, after a while I decided to use some rosin and I haven't had any problems, since I started using that.


On Phillies general manager Ruben Amaro Jr. speaking with a large group of minor league players this past week...

One of the big things that he talked to us about, that really spoke to me the most, was that he was in our same position at one point in his professional career. One thing that he talked about was being in our shoes and he understands what it takes to be a big leaguer and what it takes to strive and go through the minor leagues and especially all the long seasons of a minor leaguer. I think that having a general manager that knows that and understands is something that speaks to me the most. He brought that up and I took some time to reflect on that. And I realized that this is what I want to do and I am ready to do whatever it takes and make whatever sacrifices it will take to get to the big leagues.