Reflecting on the Departed, Part 2

By Jay Floyd September 06, 2011
Recently, we reviewed the prospects that the Phillies dealt to acquire Roy Halladay. As a sequel to that piece, this week we'll take a glance at the minor leaguers that Philadelphia sent to Houston in exchange for Roy Oswalt.

Much like the deal for Halladay, the second of the team's pair of Roys, Mr. Oswalt, cost the Phillies a three-piece of young talent.

At the time of the July, 2010 deal, Houston was reported to be in the market for a Major League ready contributor to fill Oswalt's void on the roster. The Phillies obliged and sent 2009's Sporting News Rookie of the Year, J.A. Happ, over to the National League Central's current cellar dwellers.

After joining the Astros last season, the left-handed Happ did a respectable job, going 5-4 with a 3.75 ERA in 13 starts. This season, however, was considerably different. After posting a 7.66 ERA in 10 combined June/July starts, Happ was sent down to Triple A Oklahoma City, where he sported a 1.50 ERA through 3 starts and earned a return to the big leagues. Happ may have gotten himself back on track, as he has held opponents to a .226 average in 3 starts with the Astros since the stint in the minors, which is a massive change compared to his .326 batting average against in his previous 10 outings for the Astros.

The top prospect sent to Houston was speedy outfielder Anthony Gose, who was flipped in another deal almost immediately, coincidentally for the same player that Michael Taylor from the Halladay trade was swapped for. The Astros traded for Brett Wallace, allowing Gose, an offensive hero for the 2009 SAL title winning Phillies Class A Lakewood team, to rejoin his championship BlueClaws pal Travis d'Arnaud, who was also a piece in this previous year's Halladay trade. 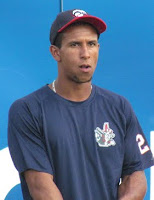 Gose, the Phillies' 2nd round draft pick from 2008, and d'Arnaud lived approximately 10 minutes from one another in California and knew each other prior to turning pro. The twosome is now together with New Hampshire, where they have led the team to the Eastern League's Eastern division title. The Fisher Cats will face the Phillies' Double A affiliate, Reading, in the opening round of the EL playoffs beginning on Wednesday.

After leading the galaxy in stolen bases with Lakewood two years ago, when he swiped 76 bags, Gose had a down year in 2010, with just 45 successful steals while being caught 32 times. Gose, stated in an exclusive interview earlier this season that he began to think too highly of his own abilities and felt he could take any base at any time, after his superior showing in 2009. Gose was humbled and took the drop in base path production as a push to learn more about reading pitchers and picking his spots.

This year, the 21-year-old Gose is back on top, leading the Eastern League in steals with 70, having been caught just 15 times. With excellent range and instincts in the field, Gose's feet aren't his only weapons, as he mashed 16 homeruns with a .253/.349/.415 line through 137 regular season games.

Gose credits New Hampshire hitting coach Justin Mashore with helping him develop his ability to drive the ball, which resulted in a homer total that more than doubled his previous season high (7 in 2010).

Unfortunately for Houston, they traded the man who seems to be developing into the best ballplayer of the individuals the Phillies sent their way. The 25-year-old Wallace hasn't been a good return for the Astros, bobbing back and forth between the Majors and minors this year and posting just a .679 OPS through his first 155 games with Houston. 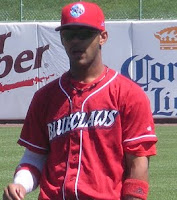 Shortstop Jonathan Villar was the third player included in the Oswalt deal. The switch-hitting Dominican Republic native was signed by the Phillies in 2008 at the age of 17. After two years in the Phillies system in which he batted a combined .268 with 44 steals in 104 games, Villar's strong defense began to get him noticed. By 2010, he helped Lakewood clinch their first half division title, batting .272 with 38 steals in 100 games.

Since the deal took place, Villar, who is now 20-years-old, has continued to shine on defense and steal bases, but hasn't looked exceptional at the plate. As a member of the Class A Lancaster Jethawks last year, Villar batted .225 in 32 games.

This season, after 47 games with Lancaster, the Astros promoted Villar to Double A Corpus Christi, where he has seen his average drop quite a bit (.259 with Lancaster in 2010, .231 with CC). On a more positive note, Villar's OPS at the Double A level this year, .687, is quite close to the .690 mark that earned him an All-star nod two levels lower with Lakewood a year ago.

Much like Happ, Oswalt hasn't been able to match the type of production he brought to his new club in the second half of last season (7-1 record, 1.74 ERA in 13 games with Phillies in 2010/7-8 record, 3.80 ERA in 18 games this year). The Phils' right-hander has spent time on the shelf with back problems this season, however.

The offensive players involved in this trade had positive 2011 campaigns, with Villar continuing to be a steady producer, as he has moved up the developmental ladder, and with Gose taking strides both literally and figuratively.

Overall, if the Phillies elect to not pick up their 2012 option on Oswalt and part ways with the veteran, and if Happ can't consistently produce solid numbers going forward, the Blue Jays could become the biggest winner of the Phillies' and Astros' 2010 deadline blockbuster, despite what Villar does, as Gose seems to be on the verge of making a considerable splash in the big leagues in the near future.