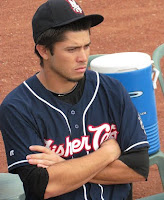 Two years ago, Travis d'Arnaud was leading the Phillies' Class A affiliate, the Lakewood BlueClaws, to their second ever South Atlantic League championship. This year, d'Arnaud was named as the Double A Eastern League's Most Valuable Player and is back in the post-season with New Hampshire.

Originally selected in the supplemental round of the 2007 draft, d'Arnaud became a well regarded prospect with his strong bat and tremendous skills behind the plate. In 2008, in his first full season as a professional, the California native posted a .305 average with 6 HR and 30 RBI in 64 combined games at two levels with short-season Williamsport and Lakewood.

The following season, d'Arnaud led a prospect laden BlueClaws club in RBI, with 71. His strides on the field caused folks all around baseball to take notice, and d'Arnaud was included in the December, 2009 trade that sent Cy Young Award winning hurler Roy Halladay to Philadelphia from Toronto.

In the Blue Jays system, d'Arnaud, has focused on staying healthy, following a 2010 filled with time on the disabled list and a concussion early this year. After finishing among the 2011 EL leaders in HR (21- tied for 4th in EL), RBI (78- 6th), OPS (.914- 2nd) and batting average (.311- 5th), d'Arnaud won the biggest individual honor at the Double A level. However, the MVP Award is not the hardware the 22-year-old is most concerned with. d'Arnaud hopes to lock down a team achievement and win the Eastern League championship, along with his Fisher Cats teammates.

"We're all really excited for the playoffs," d'Arnaud stated. "We want to go out there and win and bring the championship to the city (of Manchester) and to the Jays organization."

The focus on the greater team goal certainly doesn't mean that d'Arnaud won't recognize and appreciate the importance of the MVP nod. The humble backstop was quite surprised to learn of the commendation.

"I feel honored that whoever out there mentioned me and voted for me for the MVP and I'm still shocked. I got it and I'm real proud and I'm just happy," d'Arnaud said.

While expressing a childlike amazement over his 20+ homerun season milestone, a career high, d'Arnaud feels there's room to continue to develop more power as he moves up the baseball ladder.

"That's what I'm hoping for, man," d'Arnaud said when asked if he could increase his power production even more. "In the Major Leagues the ball goes further, so as long as I just stay with this and make the little adjustments I need to, throughout my career, I should be alright."

Before d'Arnaud, who once regarded The Hills as his favorite television program, gets any opportunities to test himself at the highest levels of the sport, he'll have his sights set on doing to pitches from the Reading Phillies what Spencer Pratt did to relationships among the cast members of MTV's hit faux reality program...destroy them.

After a rain out on Wednesday, New Hampshire will host the R-Phils for games 1 and 2 of the EL divisional series on Thursday and Friday, respectively. Game 3 is slated to be played at Reading's FirstEnergy Stadium on Saturday, while game 4 (if necessary) is set for Sunday in Reading. A game 5 would be played back in Manchester, NH.

Mamboon said…
Just curious, three of the Blue Jays farm club teams are still in the playoffs - New Hampshire, Lansing and Vancouver. That could mean an extra two weeks expenses for players. Prospects and bonus babies could handle it, but what about the non-prospects? Do teams get extra comp or bonuses for the playoffs or do they get a slap on the back and 50% off the cost of a ring?
September 10, 2011 at 10:02 PM

Jay Floyd said…
Quite sure it's not a situation where players are stuff fronting things on their own dimes for an extra 1-3 weeks. Teams take care of their guys.
September 12, 2011 at 11:44 AM