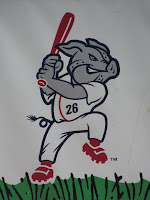 Facing elimination in the Triple-A International League Governor's Cup Finals at Allentown's Coca Cola Park, the Lehigh Valley IronPigs were hoping to get some offensive production after scoring just three total runs in their losses in games 2 and 3 against the defending league champions, the Columbus Clippers (Indians affiliate).

Also needed was a solid outing from starting right-hander Ryan Edell, who had been a strong contributor all season long. At two levels of the Phillies' system this season, the left-handed Edell posted a 10-6 record with a 3.38 ERA.

Unfortunately for Lehigh Valley, the offensive improvements never came and the Clippers' pitcher proved better than Edell on this night.

Right-hander Paolo Espino, Cleveland's 10th round pick from the 2006 draft, allowed just 4 hits and 1 run over 7 innings while striking out 5 batters and walking only 1 to earn the win.

The 4-1 defeat ended the IronPigs' season and locked down a repeat as champion for the Clippers, who won the best-of-five series in four games.

Columbus got the scoring started in the 2nd inning when shortstop Juan Diaz and catcher Paul Phillips each smacked a run scoring hit off of Edell. In the next frame, the Clippers increased their lead to 3-0 when third baseman Jared Goedert smacked a solo homerun to deep left field.

Lehigh Valley notched its lone run in the 7th inning when postseason powerhouse Brandon Moss smacked his 4th playoff homerun. Moss, the 'Pigs' right fielder who would receive some good news later in the night, finished the postseason with a .385 batting average in 7 games played.

Following the defeat, the Phillies announced that they would be adding five players from the IronPigs' roster. Outfielder Domonic Brown and right-handed hurler Justin De Fratus were recalled, while the team selected the contracts of left-handed pitcher Joe Savery, catcher Erik Kratz and Moss.

Lehigh Valley manager Ryne Sandberg will also join the Phillies for the remainder of the season, as an extra coach. The 51-year-old Sandberg, a baseball Hall of Famer, led the IronPigs to the International League final in his first season back in the Philadelphia organization since he was traded to the Cubs in 1982.

In order to make room on the 40-man roster, pitchers Mike Zagurski, Juan Perez and Drew Naylor were all designated for assignment.

Anonymous said…
Interesting blogpost at least I think so. Thank you a lot for posting this info.