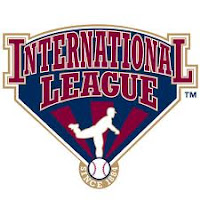 Heading into game 2 of the Triple-A level International League championship series, Lehigh Valley was on a remarkable roll, winning 8 straight games and appearing unstoppable. However, it was the Columbus Clippers (Indians affiliate) who rallied late to notch a 4-1 victory over the IronPigs before a home crowd of 5,308 at Huntington Park.

Bump was cruising along with a 1-0 lead, thanks to a solo blast by first baseman Tagg Bozied in the 5th inning. Having allowed just 3 runners to reach base through the opening 7 frames of the contest, IronPigs starter Nate Bump's success ran out in the 8th as the Clippers broke out for 4 runs and held the lead to tie the best-of-five series at 1 game apiece.

After looking dominant through much of the game, the wheels came off for the Penn State product, Bump, in the 8th inning. He served up a lead-off single to Columbus shortstop Juan Diaz, but bounced back to strike out catcher Luke Carlin. Second baseman Argenis Reyes then stroked a double to right field, moving Diaz to third base. Lefty reliever Mike Zagurski then entered the game to thwart the rally.

Zagurski intentionally walked pinch hitter Jerad Head to load the bases and set up a force play around the diamond. Right fielder Travis Buck drove a fly ball to left field for a sacrifice fly that scored Diaz and tied the game at 1.

IronPigs shortstop Freddy Galvis kept the game tied with a diving stop on a single by Columbus third baseman Jared Goedert, to keep the ball in the infield. But Zagurski then uncorked a wild pitch while facing first baseman Beau Mills that allowed the Clippers to take the lead. Mills, Cleveland's 1st round draft pick from 2007, put his own stamp on things when he singled to bring in both Reyes and Head to cap the scoring.

Right-hander Mitch Talbot, who made 28 Major League starts a year ago and 11 starts this year for the Indians, looked sharp, going the distance for the complete game victory. Talbot, 2-0 in the postseason, struck out 7 and walked none while allowing just the lone run against the Lehigh Valley offense.

Highly regarded Phillies prospect Domonic Brown went 0-for-4 in the game, including a strike out that ended the game, lowering his postseason batting average to .067.

The remainder of the series will be played at Allentown's Coca Cola Park. Game 3 is slated for 7:05 PM on Thursday, while game 4 is scheduled for Friday evening at 7:05. Game 5, if necessary, will be played Saturday at 6:35 PM.