Reflecting on the Departed

By Jay Floyd September 02, 2011
Recently, we took a look at the return the Phillies acquired when they traded Cliff Lee to Seattle in December 2009. So why not take an updated look at the talent the Phillies traded away to obtain Roy Halladay? 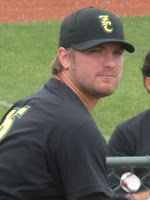 The biggest key to the deal with Toronto was righty hurler Kyle Drabek, who made the Blue Jays' opening day roster this season. The Phillies' first-round draft selection from 2006, Drabek was a force in the minors after bouncing back from Tommy John surgery in 2008, posting a 13-6 record and a 3.03 ERA in 33 outings from 2008-2009 at four levels of the Phillies' developmental system.

After joining the Toronto organization, Drabek had a strong 2010 with the Double-A New Hampshire Fisher Cats, leading the team to the post-season with a 14-9 record and a 2.94 ERA. The 6-foot-1-righty rode that string of success right into a September call-up, making three starts for Toronto, all of which he lost.

In an exclusive interview last August, Drabek stated that he felt he was ready for Major League competition, however this season, he has struggled. He lasted on the Blue Jays' big league roster until mid-June, but was demoted to Triple-A Las Vegas after getting torched to the tune of a 15.30 ERA and a .404 batting average against in his final 3 starts. Things haven't gotten better for the 23-year-old as a member of the 51's in the Pacific Coast League. Through 14 starts at the Triple A level, Drabek has gone 4-4 with a 7.41 ERA and a .361 opponent's batting average.

While the young fireballer isn't a bust quite yet, he certainly hasn't had the sort of impact over the past 12 months that Toronto fans would have hoped for.

Another highly regarded prospect in that trade was catcher Travis d'Arnaud, also a 1st round draft pick by the Phillies (supplemental round, 2007). The 6-foot-2-inch 195-pound California native was already among the top ranked prospects in the Philadelphia organization before he helped lead the Class A Lakewood BlueClaws to their first of two consecutive championship. Guiding the pitching staff and leading the team in RBI with 71, d'Arnaud rode a trophy clinching high into an off-season that would see him change affiliations.

Since joining the Blue Jays organization, d'Arnaud has been on a steady rise upward, spending an entire season each at Class-A Advanced in 2010 and at the Double-A level in 2011. After having missed some time last season due to injury and posting a .256 average with 6 HR and 38 RBI in 71 games, d'Arnaud really exploded as an offensive force this year. En route to locking down the Eastern League MVP Award, d'Arnaud produced for the playoff bound New Hampshire Fisher Cats, batting .313, mashing 20 HR and driving in 77 runs through 112 games.

Speaking this week about his career high power numbers, d'Arnaud credited his hitting coach, Justin Mashore with helping him maintain a steady approach.

"(The difference this year has been) me and Mashore, just banging it out every day, making sure I stay consistent with my swing and my approach," d'Arnaud said. "And that's pretty much it, I mean I don't try to hit homeruns. I think before I would try and it's harder to try to do it instead of just accidentally running into one. And this year, I ran into twenty of them and I still can't believe I have twenty. I feel like a little kid. I always feel like a kid, but I still can't believe it."

d'Arnaud's brother Chase made his Major League debut with the Pirates this year, so Travis is hoping to accomplish the same feat soon.

The third piece in that deal was outfielder Michael Taylor, who was quickly flipped by Toronto to Oakland for first baseman Brett Wallace.

In the Athletics system, Taylor, who will turn 26-years-old this coming offseason, has spent two seasons with the Triple-A Sacramento River Cats.

This season, having missed some time due to injury, Taylor's average is the same at .272 through 92 games, but his power seems to have bounced back a bit, as he has slugged 15 homers. Word out of Oakland is that Taylor will make his big league debut this weekend, as he is said to have been added to their big league roster.

While some of the future stars that Philadelphia gave up for Roy Halladay have fizzled a bit and another has shown bust-out progress, the Phillies have clearly seen the Toronto deal pay off. Halladay has won one NL Cy Young, is a frontrunner for a second straight, and has wrecked the competition in nearly every start.