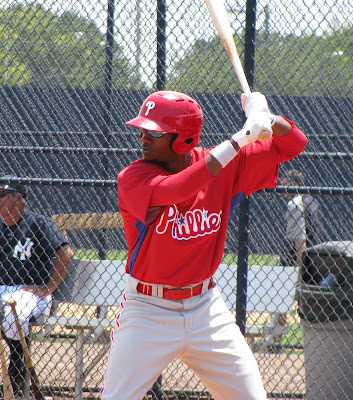 Today over at PhilliesNation.com, their team of writers took part in a round table discussion, answering the question of whether or not rookie outfielder Domonic Brown should be included on the Phillies' postseason roster.

Various points of view were expressed, however my answer to the inquiry was left out of the published piece. Below are the thoughts that I submitted on the matter.


No, Domonic Brown should not be included on the Phillies' postseason roster unless manager Charlie Manuel begins using Brown a considerable amount over the final week of the regular season. As things stand now, the 24-year-old Brown has been the odd man out, as at bats that could be suited for Brown are going to John Bowker and others.

Even before rejoining the Phillies last week, Brown slumped so much down the stretch, for the Triple-A Lehigh Valley IronPigs, that he was benched for two of the team's seven playoff games. Additionally, in the recent action that Brown did see for Lehigh Valley, he was only used as a designated hitter or a pinch hitter, which means he hasn't played the outfield since August 29th.

Recent talk from GM Ruben Amaro Jr. stating that the Florida Instructional League was a possibility for Brown, has virtually removed him from the running for a postseason roster spot, in my mind.


To read other PN contributors' thoughts on the possibility of Brown making the playoff roster and/or to join the discussion on the PhilliesNation website, click here.

captain wrecked 'em said…
Getting Bowker was such a waste. Brown should have been brought up sooner. The team holding him down ain't good for progress.
September 23, 2011 at 4:39 PM