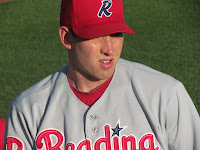 For right-handed hurler Austin Hyatt, the 2011 season was packed with success. As the virtual ace of the Double-A Reading Phillies' pitching staff, the 25-year-old Hyatt proved to be one of the most reliable pitching prospects in the Philadelphia developmental system.

During a season in which he was named as an Eastern League All-Star, Hyatt posted tremendous numbers in the second half, to help his team reach the post-season. In 10 starts after the All-Star break, Hyatt posted a 5-1 record with a 2.78 ERA and a .221 batting average against.

Overall with Reading, the 6-foot-2-inch 180-pound Hyatt averaged more than a strike out per inning pitched (171 K's in 154 1/3 innings), which is impressive at any level.

According to Reading pitching coach Bob Milacki, who previously coached with the Class A Lakewood BlueClaws, Hyatt's pitching repertoire has come along quite well since Milacki first saw the Georgia native when Hyatt joined the 'Claws for their postseason run two years ago. But while some people evaluate Hyatt, whose fastball tops out in the mid-90's, as having been old for each level he has pitched in, Milacki feels that Hyatt's progress is leading toward bigger things.

"Overall, I think he has a chance (to reach the Majors), especially with his slider coming around and he's always had a good change up," Milacki said. "He's one of the few guys I've seen (at this level) that has a swing-and-miss fastball. And that's not because of his velocity, it's because of the angle," Milacki stated.

Hyatt signed with the Phillies in 2009 after being drafted in the 15th round out of the University of Alabama, but was previously drafted by the Braves in 2008 and elected to stay in school.

Prior to his promotion to Lakewood at the end of the 2009 season, Hyatt posted a 3-0 record with 6 saves and a 0.66 ERA in 17 outings for short-season Williamsport. In 2010, his first full year as a pro, Hyatt was named the Florida State League's pitcher of the year, when he went 11-5 with a 3.04 ERA in 23 games for the Class A Advanced Clearwater Threshers.

Hyatt, who was ranked 12th in a recent Phillies prospect survey conducted by The Reading Eagle, clearly has his sights set on climbing the developmental ladder, going forward, as all prospects do, but Hyatt's drive wasn't the same as many other minor leaguers this season. While most of his peers focused on improving their physical skills, Hyatt's largest goal this year was to enhance the mental side of his own game.

"A lot of (my focus on improving this year) has been on reading hitters," Hyatt said. "I try to see what the hitter's presenting based on his swing and his approach in the box. It's not something I did too much last year, reading swings and reading hitters, but it's something that Bob (Milacki) and I have focused on and really tried to bear down and work on."

The mindset for Hyatt is somewhat unique. While batters at various levels of baseball can feel it is advantageous having faced a pitcher before, allowing themselves opportunities to figure out the opponent's tendencies, Hyatt feels that he, as a pitcher, is better off after having seen batters multiple times. He feels this helped with his exceptional second half this year.

"A lot of times, facing a team twice, you kind of learn the hitters," Hyatt stated. "Just like with New Hampshire, I've faced them so many times, I know each guy and how to pitch them and execute pitches. It allows me to be more comfortable out there and have a better game plan going into each start."

Despite taking a hard-luck loss at the hands of the New Hampshire Fisher Cats (Toronto affiliate) in game 3 of the Eastern League divisional playoffs, Hyatt performed very well against the Eastern division champions this year. Facing a Cats lineup that included EL Most Valuable Player Travis d'Arnaud, highly regarded Blue Jays prospect Anthony Gose as well as sluggers Mike McDade and Moises Sierra, during the regular season Hyatt went 3-0 with a 1.00 ERA. In addition, he went on to allow just 1 earned run in 7 innings, while striking out 9, in his lone postseason outing against New Hampshire, who ousted Wild Card entrant Reading from the playoffs.

With a menu of pitches that he has used to dominate many of the best hitters in his league during each of the past two seasons, a developing mental approach needed to succeed at higher levels and a strong 2 1/2 years in the Phillies' organization, the future is bright for Austin Hyatt.

You can also connect with PhoulBallz on Facebook by clicking HERE